By Newsroom on August 25, 2015Comments Off on Caroline Wozniacki ‘Serves Up’ Soft Serve at Godiva Ahead of US Open 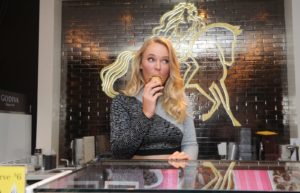 Godiva Chocolatier’s global ambassador and tennis star, Caroline Wozniacki, made a special appearance at the MetLife Godiva boutique, where she worked on her “serve” by promoting the brand’s Soft Serve, as well as announced a tennis-inspired gift with purchase program, in advance of her appearance at the US Open.

“I’ve always been a big fan of Soft Serve,” Wozniacki said. “My father used to reward me after a big match or practice with a tasty frozen treat, so it’s very fitting and special to be working with Godiva Soft Serve in advance of my next big game,” she added.

In honor of Wozniacki’s upcoming matches, shoppers at select New York City Godiva boutiques will receive the “Caroline,” an exclusive, tennis-themed chocolate, with the purchase of any Soft Serve from August 31, 2015 through the end of the US Open. 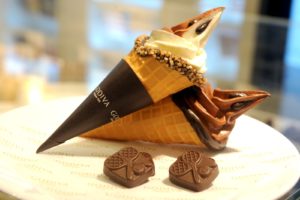 Made with the brand’s signature Belgian chocolate and a refreshing strawberry filling, the limited-edition “Caroline” piece is the perfect every day indulgence for the end of summer, especially when paired with Soft Serve.

“Like Caroline, we know a lot of shoppers have nostalgia and a soft spot in their hearts for Soft Serve, especially as a little self-reward,” said Mohamed Elsarky, Godiva CEO. “We’re very excited to support Caroline as she competes next week, and look forward to sharing a cool treat with her after the US Open to celebrate.”

Godiva first announced its partnership with Wozniacki in February of this year, and have worked together on several initiatives globally while she has been on the tournament circuit.

Caroline Wozniacki ‘Serves Up’ Soft Serve at Godiva Ahead of US Open added by Newsroom on August 25, 2015
View all posts by Newsroom →