By Newsroom on June 12, 2014Comments Off on Caulder Moore Help Fullers Open Their First Ever Airside Pub in Heathrow T2 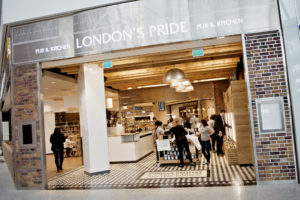 Fullers Brewery in London are to open their first ever pub airside called ‘London Pride’ in the new Terminal 2 at Heathrow Airport, to be officially opened by HM Queen Elizabeth II on 23 June 2014. Caulder Moore created the concept for Fullers, having worked with them on previous projects.

Caulder Moore translated the brand essence of Fullers by taking its provenance and heritage then re-telling it in a 21st century environment. Combining new and old elements to create an emotive experience rather than a ‘pastiche’ of a pub airside.

A new beer called ‘Wingman’, a light golden cask ale, has been brewed exclusively for London Pride at Terminal 2. London’s Pride showcases the quality of Fullers Brewery established 170 years ago and just 8.3 miles from Heathrow.

The airside pub has very clear zones to help passengers enjoy the Fullers experience in a shorter space of time. Caulder Moore has designed a garden, lounge and library area to sit alongside the bar and kitchen, with flight screens incorporated so that customers can keep one eye on departure times. Even the historic Chiswick Brewery gates have been re-created to give a lasting impression of this London institution.

Jonathon Swaine, Marketing Director, Fullers said, “Our challenge was to distil the essence of Fullers and its heritage within the context of the most modern airport terminal to open. We wanted to offer ‘the Fullers experience’ in a place that is very different from the pub on a street corner. Caulder Moore really understood our brand, the challenges of operating airside, and bought the new pub to life with design touches adding to the brand experience in a travel environment.”

Irene Maguire, Owner, Caulder Moore added, “We took the richness and provenance of Fullers and translated that into a new airside environment for the first time. It was exciting to take the Fullers spirit into a completely different context with a different competitive set than it usually operates in. I think we achieved a very dynamic pub experience with nods to the past, which is also rooted in the future.”

Caulder Moore Help Fullers Open Their First Ever Airside Pub in Heathrow T2 added by Newsroom on June 12, 2014
View all posts by Newsroom →