By Newsroom on December 3, 2018Comments Off on Cheesecake Factory Offering Free Slices on Delivery for 40th Anniversary 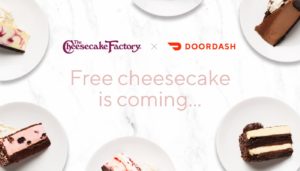 The chain restaurant announced the news on November 30 and explained just what customers have to do to get in on this deal, which will take place on Wednesday, December 5 starting at 11:30 a.m. local time.

For the promotion, The Cheesecake Factory has teamed up with DoorDash, the food delivery service. To get a free slice of cheesecake, you’ll have to place a Cheesecake Factory order through DoorDash and use the promo code “FREESLICE” when checking out. There is no minimum amount of money that must be spent in order to use the code, and the deal will continue on December 5 while supplies last.

Surprisingly, Cheesecake Factory is not just randomly choosing the type of free slice customers will get or leaving everyone to just have plain. Those who order will get to choose the flavour they want from whatever is currently on the menu.

The restaurant also recently brought back its Peppermint Bark Cheesecake for the holiday season, which means it can be chosen with the offer, as well. This holiday treat consists of chocolate crust and white chocolate cheesecake with a peppermint bark swirl throughout and is topped with white chocolate mousse and chopped peppermint pieces.

In addition to free cheesecake, DoorDash is also offering free delivery on Cheesecake Factory orders from December 5 to December 11. DoorDash generally has a delivery fee since the deliveries are made by “Dashers” who work for DoorDash, rather than by delivery drivers employed by the restaurants themselves. For both the free cheesecake offer and the free delivery promotion, customers will, of course, have to make sure that there is a Cheesecake Factory within delivery distance of their home, which can be figured out here.

Cheesecake Factory Offering Free Slices on Delivery for 40th Anniversary added by Newsroom on December 3, 2018
View all posts by Newsroom →