By on July 20, 2017Comments Off on Chipotle and RZA Cook up Music with Each of the Mexican Grill’s 51 Ingredients

Chipotle Mexican Grill is using music to draw attention to the 51 ingredients making up its menu in a sonically-pleasing collaboration with Wu-Tang Clan producer RZA.

In the two-minute video, an original sound is designated to each ingredient. RZA composes music like a chef would a meal in a visually engaging ad that splices animation with a unique soundtrack. 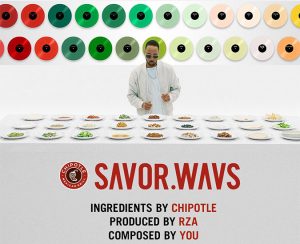 Ingredients like guacamole, cilantro, jalapeño and more were all designated instruments which all contributed to the song.

Mark Crumpacker, chief marketing and development officer at Chipotle, said: “SAVOR.WAVS supports our commitment to using only real ingredients in our food — without any colours, flavours or industrial additives. As a parallel to the way we cook, RZA used only natural instruments, and composed them such that each unique combination works beautifully together.”

RZA added: “I’ve always believed food, like music, has the power to change our day and even shape our world. SAVOR.WAVS continues to challenge us in how we think about food, what’s real and what’s responsible.” 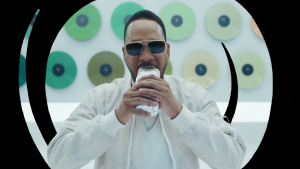 The work draws attention to the SAVORWAVS.com site which allows consumers to customise their orders.

The Wu-Tang Clan, The Head and the Heart, Awolnation, GRiZ and PANG! The remix by Wu-Tang Clan includes members Raekwon, Method Man, Ghostface and RZA, all contributed original sounds to the campaign which can be listen to on Spotify or Soundcloud.

Chipotle and RZA Cook up Music with Each of the Mexican Grill’s 51 Ingredients added by on July 20, 2017
View all posts by →