By Newsroom on October 1, 2012Comments Off on Coca‑Cola Recycles 10.5 Million Bottles As Part Of London 2012 Sustainability Pledge

The Coca‑Cola System in Great Britain (‘Coca‑Cola’), has today announced that it has recycled 10.5 million bottles collected from the London 2012 Olympic and Paralympic Games, returning them to GB shelves as part of new bottles. This will result in 42 million bottles, each containing 25% rPET. The success of this large-scale bottle-to-bottle recycling process is part of Coca‑Cola’s commitment to helping the London Organising Committee of the Olympic and Paralympic Games (LOCOG) deliver the most sustainable Games possible.

During the Games, Coca‑Cola sought to educate people about the speed with which a plastic bottle could now be turned into a brand new bottle in this country. Nielsen research commissioned by Coca‑Cola shows that 70 per cent of visitors surveyed at London 2012 said, on learning this, they wo 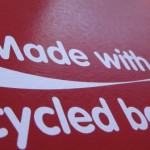 uld now be more likely to recycle at home.

Coca‑Cola Recycles 10.5 Million Bottles As Part Of London 2012 Sustainability Pledge added by Newsroom on October 1, 2012
View all posts by Newsroom →