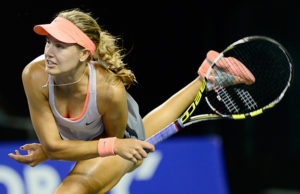 Coca-Cola Canada has inked a three-year sponsorship deal with ambitious homegrown tennis star Genie Bouchard, from Montreal, Quebec. Led by two of Coca-Cola‘s most recognizable brands, Coke and Diet Coke, the company will leverage Bouchard’s growing profile as one of the world’s most prominent rising young athletes – currently ranked 12th in the world.

Coca-Cola Canada is committed to encouraging active, healthy living and adds Bouchard to an impressive list of amateur and professional athletes that represent its brands globally.  “Genie brings something extra special to the table.  She is not only an incredibly talented tennis player but her down to earth style makes it so easy for people to relate to her,” said Michael Samoszewski, VP, Sparkling Business Unit, Coca-Cola Ltd. “Her demeanor both on and off the court embodies happiness and active, healthy living; and because of this, she is truly is an inspiration to Canadians and a perfect fit for our company. We are proud to partner with this rising young star on her journey.”

Bouchard has quickly made a name for herself due to her tremendous talent and drive.  At 20 years old, she has already collected some impressive accolades including being named the 2013 Women’s Tennis Association Newcomer of the Year and the 2013 Canadian Female Athlete of the Year.  Bouchard’s 2014 season is off to an amazing start with back-to-back Grand Slam semi-final appearances at both the Australian Open and French Open, the only player to accomplish that this year.

As part of the three-year agreement, Bouchard will be integrated into key marketing efforts for the brands – including advertising, retail activation, experiential events and more.

“I am excited to partner with one of the world’s most iconic brands,” said Genie Bouchard.  “Coca-Cola works with some very talented and high-caliber personalities and athletes. It’s great to have their support and to be joining the Coca-Cola family.”

Bouchard will also be working towards making her first Olympic appearance at the Rio 2016 games – of which Coca-Cola is a sponsor.  The Coca-Cola Company maintains the longest continuous relationship with the Olympic Movement. In 2005, The Coca-Cola Company and the IOC extended their partnership agreement for an unprecedented 12 years until 2020.