By Newsroom on October 14, 2013Comments Off on Coca-Cola Memorabilia and Collectibles Selling At Auction in Biscoe, USA

The Scott Family, the original and only owners of the Coca-Cola Bottling Plant in Biscoe, North Carolina, are selling at public auction the Coca-Cola memorabilia, collectibles, equipment and real estate associated with their former business. Bottling operations began at the plant in 1909 and continued until the business was sold to Coke Consolidated in 1990.

Even though bottling operations stopped in 1990, many of the Coca-Cola advertising, promotional, point-of-sale and marketing items have remained from the inception in museum quality condition and are being offered to the highest bidder.

The sale will include memorabilia from a by-gone era of independent, small town Coca-Cola Bottlers.  The owner is providing a signed and notarized Letter of Authenticity and Certificate of Ownership for the collectibles and memorabilia.

Some items are new and still in the original shipping cartons. All the Coca-Cola items and memorabilia are authentic, genuine, and original. Most collectibles are Coke related items but there are also Tab, Sprite, Fanta and Dr. Pepper memorabilia. 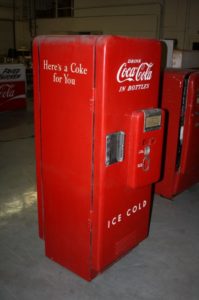 Other items being offered are a 1959 Chris Craft Continental, Victor Victrola Talking Machine, numerous merchandising training vinyls (33 1/3’s) and other items and equipment too numerous to mention.

“This is an opportunity to acquire some unique, hard to find Coke collectibles that are in museum quality and mint condition.  We rarely find Coke items in these quantities and in this condition,” said Thomas McInnis of Iron Horse.  This sale presents an opportunity for collectors to purchase an authentic piece of American Coca-Cola advertising.

The bottling facility property and several adjoining parcels will also be offered for sale by Iron Horse. This auction will be conducted through an on-line auction with a live ending on November 1st at the First Bank Conference Center in Troy, NC. The property is being offered in 5 parcels, all located on S. Main Street and Oak Street in Biscoe, NC.

Coca-Cola Memorabilia and Collectibles Selling At Auction in Biscoe, USA added by Newsroom on October 14, 2013
View all posts by Newsroom →