By Newsroom on February 5, 2016Comments Off on Coca Cola Sends Out Marvel-Themed Cans as Teaser for Super Bowl Ad 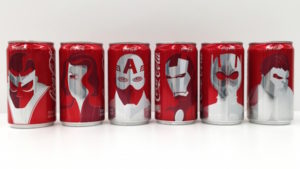 Coca-Cola is partnering with Marvel for a Super Bowl spot, as confirmed by Adweek.

The company has sent out red boxes of mini coke cans featuring minimalist illustrations of the Avengers, including favourites like Black Widow, Captain America and Iron Man. Interestingly, their eyes are formed by silhouettes of their associated icons—for example, Captain America’s eyes feature his famous shield.

Follow @CocaCola to watch the story unfold.” The 60-second spot will air during the second quarter of the Super Bowl broadcast.

Coca Cola Sends Out Marvel-Themed Cans as Teaser for Super Bowl Ad added by Newsroom on February 5, 2016
View all posts by Newsroom →