By Newsroom on April 24, 2013Comments Off on Coca-Cola: The Remix Music Bottle

The Coca-Cola Company and OgilvyAction have developed a social music project called the ‘Coca-Cola Remix Bottle’. It revolves around a Coca-Cola bottle that captures every day sounds turning them into shareable remixes, spreading happiness wherever it goes.

The Coca-Cola Remix bottle was created when Coca-Cola ASEAN and a young Japanese DJ-inventor, Jun Fujiwara, got together. The idea of a social music project that instantly captures the sounds of a particular place or time and remixes them into cool shareable music tracks that can be enjoyed by many, embraced the Coca-Cola ‘Open Happiness’ message.

“There is no mistaking the sound you hear when you open a bottle of Coca-Cola. With the Coca-Cola Remix Bottle we have given the classic opening ritual a new twist,” said Leonardo O’Grady, ASEAN IMC Director, The Coca-Cola Company. 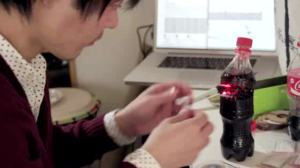 “By remixing everyday sounds we have invited consumers to reinvent the sound of happiness whether it’s from a busy street, children playing or people involved in sport. Everyone, wherever they are in the world, can enjoy these sounds and the music made time and again.”

People across Tokyo were surprised and delighted by the music mixes that were created from their sounds by the Coca-Cola Remix Bottle.

The sounds are being released as ringtones and music videos at www.youtube.com/cokeremixbottle and can be shared with friends and family.

“New inventions are allowing us to take creativity to a new level and we are going full circle back to the days when agencies were not stuck in a particular medium such as print or TV.”

Coca-Cola: The Remix Music Bottle added by Newsroom on April 24, 2013
View all posts by Newsroom →