By Newsroom on July 3, 2014Comments Off on Coca-Cola Unveils Anamorphic Street Mural of Rio in Celebration of The World Cup

Imagine the thrill of jetting into Brazil for the 2014 FIFA World Cup andsoaring over the iconic cityscape of Rio de Janeiro.

Now imagine if you could enjoy this experience without even boarding a plane. This is what passers-by in London saw recently, when Coca-Cola unveiled stunning 3D artwork to support the launch of a giant football giveaway in Europe for the 2014 FIFA World Cup. This summer, Coke gave away millions of limited-edition footballs to encourage everyone, everywhere, to enjoy moving more.

The awe-inspiring street artwork, created for Coca-Cola by internationally acclaimed street artists 3D Joe and Max, brought to life the dramatic and panoramic views over Rio. The viewer was transported to the focal point of this summer’s tournament. The image was surrounded by a turf pitch, encouraged passers-by to move with a football.

Coca-Cola believes in the power of football and how one ball can inspire people everywhere to move. As a result, the promotion encouraged people to enjoy a more active, healthy lifestyle and bring movement and happiness to thousands of teens. At the same time, Coca-Cola made donations to local charity partners in different European countries. 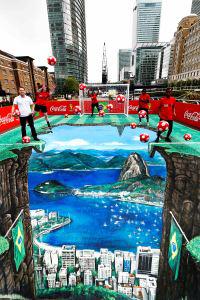 In Great Britain, for every valid Win A Ball entry, Coke donated to StreetGames, which helps bring sport to disadvantaged communities across the UK. The donations was designed help StreetGames expand its network of clubs across the country.

In the Netherlands, for every football handed to consumers, Coca-Cola donated a football to the Youth Sport Fund, up to 500 footballs a day. In addition, the company announced a grant to support the fund over the next three years, which will help underprivileged children enjoy the fun of sport and exercise. And in Belgium, Coke made a donation for every football handed to consumers to the Football+ Foundation, which hoped to encourage and support teens and adults with disabilities to play football.

The unveiling of the artwork – technically referred to as “anamorphic” street art – was given an extra boost by the support of former England football star Michael Owen.

Commenting on the ball giveaway, he said: “A football is a great, simple way of getting everyone moving and having fun at the same time. As a father, I am always encouraging my kids to be active because I know physical activity plays a key role in everyday life.”

Coca-Cola Unveils Anamorphic Street Mural of Rio in Celebration of The World Cup added by Newsroom on July 3, 2014
View all posts by Newsroom →