By Newsroom on September 22, 2015Comments Off on Diageo Introduce a Nitrogen-Infused IPA in the USA – Guinness Nitro IPA 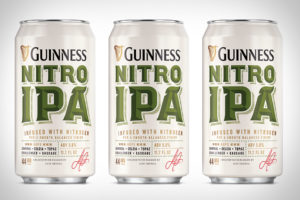 By bringing Guinness-style nitrogenation to an IPA, the Irish brewer has created a hop-forward India Pale Ale with the qualities of a classic Guinness pint — namely balanced flavour and aroma, creamy mouthfeel and a perfectly formed and long-lasting head of dense bubbles.

Made in Dublin, Ireland at St. James’s Gate, Guinness Nitro IPA is brewed with Irish barley malt, a touch of roasted barley and five hop varieties — Admiral, Celeia, Topaz, Challenger and Cascade. The Challenger, Cascade and Topaz hops are dry-hopped to accentuate a sharp citrus aroma. The beer’s blend of CO2 and Nitrogen helps to balance out the profusion of hop flavours, while also creating the signature surge and settle made famous by Guinness Draught. The IPA is brewed with the same unique Guinness yeast strain used to ferment all stouts at St. James’s Gate.

“IPAs are complex and hoppy, but for some beer drinkers the bitterness can be too much,” explained Luis Ortega, the brewer who created this beer’s recipe. “We aimed to make a balanced, smooth beer.  Guinness perfected nitrogenated beer more than 60 years ago, so we believed we could really add something new to the style. There’s plenty of hoppy flavour, with citrus aroma to the fore, but the nitrogen rounds it all out. The mouthfeel is fantastic, and the use of Guinness yeast gives it an echo of the character of our famous stouts.”

In two videos, Guinness reveals the journey that led to creating Guinness Nitro IPA and discusses the behind-the-scenes brewing process. Guinness began exploring beer nitrogenation in the 1950s as a way to offer a better pint on tap. It was finally released in Ireland in 1964 with the launch of nitrogen-infused Guinness Draught, which became the most popular of all Guinness beers. In the 1980s, Guinness invented the award-winning widget, bringing the qualities of draft nitrogenation to canned beer. In essence, the widget is a small plastic ball filled with nitrogen that releases upon the opening of a can, creating the same surge and settle effect of a nitrogenated tap. Guinness Nitro IPA cans use this same widget technology.

Guinness Nitro IPA was developed by The Brewers Project, a small group of Guinness brewers charged with exploring, inventing and perfecting new beers. The final beer is brewed in Dublin at St. James’s Gate’s Brewhouse No. 4 (only the fourth brewhouse in the 256 year history of Guinness). In addition to exploring various ales, The Brewers Project has been busy with lagers, creating the recipe for Guinness Blonde American Lager, a crisp, hop-forward lager brewed in Latrobe, Penn. using yeast from St. James’s Gate.

Guinness Nitro IPA will be available in a six pack of 11.2 oz. cans, with a suggested retail price of $8.99 and 13.2G kegs. It is best enjoyed in a famous Guinness Gravity Glass, which is specifically designed to optimize the benefits of nitrogenation and the aroma of the beer.

It will be on shelves nationwide in the US beginning in September 2015 and on tap in select bars across the country. The beer has an ABV of 5.8% and 44 IBUs.

Diageo Introduce a Nitrogen-Infused IPA in the USA – Guinness Nitro IPA added by Newsroom on September 22, 2015
View all posts by Newsroom →