By Newsroom on May 23, 2013Comments Off on Diageo Launches Cîroc Vodka Pitch 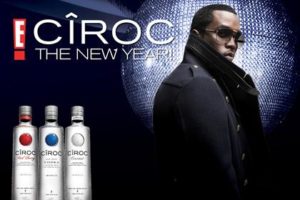 Diageo is looking to expand its roster with a search for an advertising agency to handle its vodka brand Cîroc.

The drinks giant has approached a number of agencies directly to invite them to pitch for the business. Cîroc is positioned as an ultra-premium brand.

Cîroc has not spent recently on advertising, according to Nielsen. It does, however, have a close alliance with music.

Since October 2007, Cîroc has had a profit-share deal with the musician and entrepreneur P Diddy, who acts as its “chief marketing officer and brand ambassador” and hosts special events that feature the brand.

He hosted a 2012 New Year’s party at his private estate in Star Island, Miami, in association with Cîroc and posted pictures and films of the night on social media sites.

In July last year, Diageo parted company with its European marketing director for vodkas Simon Breckon. Breckon was responsible for the sales and marketing of the company’s portfolio of vodkas, including its market-leading Smirnoff, as well as Cîroc and Ketel One.

In an interview with Campaign earlier this year, Diageo’s consumer marketing and innovation director for Western Europe, Matt Barwell, said he was keen for the company to increase its involvement in branded content in order to reach consumers.

Diageo Launches Cîroc Vodka Pitch added by Newsroom on May 23, 2013
View all posts by Newsroom →