By Newsroom on December 15, 2015Comments Off on Diageo Rolls Out Consumer Trial of Johnnie Walker Connected Bottles 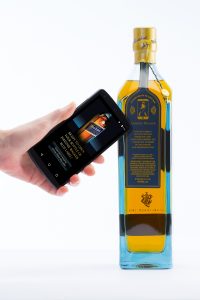 Diageo has kicked off a consumer trial of its Johnnie Walker Blue Label connected bottle prototype as it looks to test out the technology’s ability to push personalised messages.

From November 14, 500 bottles will go on sale in Thailand kitted out with Near Field Communications (NFC) to show targeted messages and exclusive content to people using their smartphones.

Diageo is partnering with Selinko, a software and solution provider, for this limited edition launch. Selinko’s Smart Bottle solution relies on an Inside Secure patent pending capSeal tag technology and an Amcor capsule which can detect if a bottle has been opened or not.

The prototype made its debut earlier this year at Mobile World Congress.

Johnnie Walker is not the only brand exploring the capabilities of the connected bottle. Rémy Martin unveiled its ‘tamper-proof’ Club Connect bottle in China this autumn, while Absolut is planning trials to turn its bottle into a media channel via the Internet of Things.

Diageo Rolls Out Consumer Trial of Johnnie Walker Connected Bottles added by Newsroom on December 15, 2015
View all posts by Newsroom →