Dolmio Gets Dramatic in New Ad from AMV BBDO

By Newsroom on September 19, 2017Comments Off on Dolmio Gets Dramatic in New Ad from AMV BBDO

Mars Food and agency AMV BBDO have launched the latest advert in its new Dolmio ‘No drama’ campaign, aimed at helping families to enjoy drama free dinnertimes. The campaign, which launched in August, stems from the insight that dinnertime can be the most stressful part of the day – but the power of Dolmio is that a delicious meal can bring every family together. 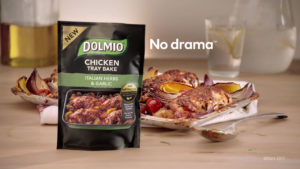 The new advert centres on a father cooking dinner for his daughter. Upon learning that they are once again having chicken for dinner, she melodramatically screams with such intensity that the room begins to shake. However, her tantrum is cut short as the Dad puts the tasty meal, made using Dolmio Chicken Tray Bake, on the table. The daughter is satisfied and the father relieved at a dinner time with no drama.

Dolmio has introduced a chicken range for the first time ever with its new Chicken Tray Bake range. Dolmio Chicken Tray Bake gives consumers ways to deliver a tasty twist to their midweek chicken meals. The sauce is simple to use, quick and can feed up to four people – meaning that it is perfect for families.

Ian Nundy, Dolmio Marketing Manager, said: “The campaign continues to be grounded in our understanding of families and family meal times. We know that dinnertime can be stressful for parents and we wanted to show that Dolmio Chicken Tray Bake is a quick and easy option that proves simplifying meal times need not compromise on taste.”

The advert is the second from the global campaign that launched in August and follows on from the TVC released last month starring award winning British actor, Dominic West. The ad launch was supported in the UK by a PR campaign fronted by Jeff Brazier alongside a range of new product launches, such as Dolmio No Added Sugar Pasta Sauce.

The bespoke Chicken Tray Bake advert will launch in the UK on Saturday 16th September across TV, online video and social platforms through to mid-December.

Dolmio Gets Dramatic in New Ad from AMV BBDO added by Newsroom on September 19, 2017
View all posts by Newsroom →