By Newsroom on April 5, 2013Comments Off on Domino’s Sees Sales Boost From Cold Weather 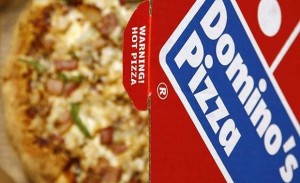 The UK’s largest pizza delivery firm Domino’s has reported buoyant sales in the first three months of the year, as consumers trapped indoors by the cold weather turned to fast food sent direct to their doors.

Sales in Domino’s 670 UK stores were up 6.6% in the first quarter of 2013 compared with the same period last year, the company reported, attributing strong growth in part to new products, such as a hot-dog stuffed crust pizza, as well as ‘buy one get one free’ offers.

The pizza delivery firm did a roaring trade in the cold snap, shaking off the effects of snowfall that had previously hit sales. During the first seven weeks of 2013, when heavy snow snarled up traffic in many parts of the country, sales growth was 1.7%, but rose to over 12% in final six weeks of trading.

“All in all it was a very strong end to the quarter,” said Lee Ginsberg, Domino’s chief financial officer to The Guardian. “Some of the really cold weather has been keeping people indoors.” 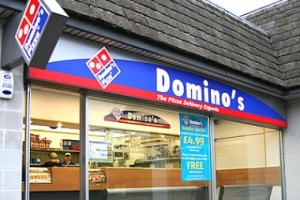 Domino’s also reported that it now makes 62% of UK sales via the internet, up from 50% one year ago. Pizza lovers are increasingly using their smart phones to place their orders and tapped in £82.4m of orders via mobile devices in the first quarter.

Ginsberg said some stores had made 80% of their sales online during online promotions, which “shows where the future is”.

Domino’s expansion shows no sign of slowing and the company confirmed plans to open 60 new outlets in the UK this year, as well doubling its franchises in Germany, taking the store count to 36.

The company reported that sales in six “mature” stores in Germany rose 40% in the first quarter from a low base. The German business is not expected to be profitable until 2015.