By Newsroom on March 21, 2017Comments Off on Domino’s Tracker is the Star in New Commercials in the US

Domino’s Pizza, one of the recognized leaders in pizza delivery, is launching a new series of commercials by Crispin Porter + Bogusky, featuring one of its most beloved technologies – the Domino’s Tracker.

Domino’s Tracker follows a customer’s pizza order as it makes its way through the store and out the door for delivery. Domino’s Tracker has followed over 100 million orders since it launched in 2008, and it has won the hearts of many consumers who are hooked on the tracking tool to see the status of their order. 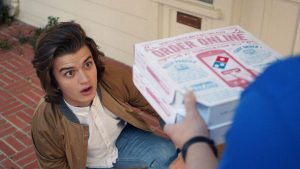 This “countdown” is at the heart of the new ads which are inspired by the iconic “Ferris Bueller’s Day Off” racing home scene. In this version, created under license from Paramount Pictures, the race to get home includes tracking a pizza on a smartwatch and meeting the delivery driver at home, instead of the school principal.

“We know that customers find the Domino’s Tracker to be a fun part of ordering from Domino’s, so we tried to capture their excitement in this new ad,” said Karen Kaiser, Domino’s vice president of advertising. “While we modernized the classic scene with Domino’s Tracker technology and Domino’s custom-built delivery car, the DXP, the scene otherwise stays true to the 80s Paramount cult classic.”

An online video – which will also air as 60-, 30- and 15-second national TV commercials – features “Stranger Things” actor Joe Keery in the lead role, sprinting across neighbourhood yards, jumping over sunbathers and running in the street alongside a car driven by none other than Alan Ruck, who played Bueller’s best friend, Cameron Frye, in the landmark film.

In addition to featuring the cameo by Ruck, Domino’s also filmed on location at the same house featured in the original. In the companion spot also released on March 20, Keery’s character demonstrates some of the many ways to place a Domino’s digital order and track its progress – from Amazon Echo to a smart TV to a waterproof smartwatch – while, yes, fashioning soapy hairstyles in the shower.

Domino’s Tracker is the Star in New Commercials in the US added by Newsroom on March 21, 2017
View all posts by Newsroom →