By Newsroom on April 13, 2016Comments Off on Domino’s Unveils ‘More Shareable’ Packaging Design by JKR 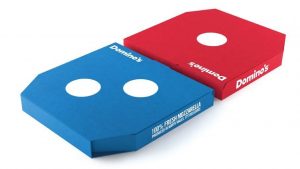 Domino’s has given its packaging a radical overhaul, that sees the generic ‘brown box’ replaced with red and blue boxes that hero the brand’s logo.

The revamp has been masterminded by branding design agency Jones Knowles Ritchie (JKR) and use the pizza maker’s two pizza deal to physically bring the logo to life with one red box and one blue box. The dramatic departure from its previous design, sees Domino’s push for something more iconic that will drive consumer engagement for the brand.

As part of the research process, JKR found that 96 per cent of all Domino’s pizzas sold in the UK are sold as a pair, due to the numerous ‘two for one’ and combo deals offered to consumers. The agency then applied this knowledge and the visual trigger of the brand’s name as inspiration, to transform the domino logo into the pack itself, creating a blue and a red box to be delivered as a pair.

All generic information has been removed from the boxes, and the packs now only feature limited product information on the side of each box to highlight the quality of the pizza ingredients.

High quality ink was also used on the boxes to ensure heat from the pizzas doesn’t affect the design or the box, and the boxes are all 100 per cent recyclable.

“Currently Domino’s pizzas come in a brown box and they were covered in activation messaging points, view on life and the world and it was all quite random,” said Sean Thomas, creative director at JKR.

“They weren’t really telling you anything specific about the brand or anything particularly special about Domino’s, and so the brief to us was that there was a sense that they could make their packaging iconic, they wanted the brand to be remembered and the packaging to be seen as iconic when it arrived at your home.”

The new boxes naturally lend themselves to sharing, social occasions and Thomas added that Domino’s is already starting to see the boxes shared across Instagram, avoiding the need for a complicated activation. “People can use the boxes themselves to create a bit of buzz and hopefully that is the thing going forward to remind people every time they order the pizza they are ordering a Domino’s.”