By Newsroom on January 18, 2018Comments Off on Doritos and Mountain Dew Join Forces for an Epic Super Bowl Ad Starring Morgan Freeman and Peter Dinklage 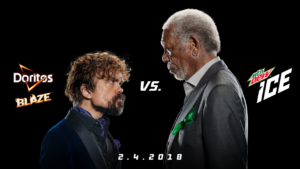 The teaser video features award-winning actors Morgan Freeman for Mountain Dew Ice and Peter Dinklage for Doritos Blaze intensely facing off. The advertisement marks the first time one company has advertised two of its trademarks back-to-back in one nationally televised Super Bowl commercial. 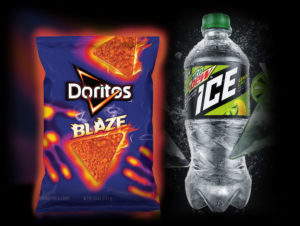 “This is a great example of the power of PepsiCo’s food and beverage portfolio coming to life for consumers on one of the world’s largest stages,” said Al Carey, chief executive officer, PepsiCo North America. “Doritos and Mtn Dew go perfectly together, and both brands have passionate fan bases. We think consumers will love Doritos Blaze and Mountain Dew Ice, as well as this engaging Super Bowl ad.”

Doritos Blaze, a bold new flavor that brings the heat, is the brand’s next national offering that fires up the hot and spicy snack market, featuring a complex flavor and heat that builds as you crunch. Mountain Dew Ice is a clear, refreshing, lemon-lime flavored Dew with a splash of real juice that will keep Dew Nation charged.