By Newsroom on January 5, 2016Comments Off on Doritos Reveal Finalists for the Last Installment of ‘Crash the Super Bowl’

There’s a certain magic to the number three — and for the very last “Crash the Super Bowl” contest, the Doritos brand is going to embrace it.  After all, good things always come in threes.

A three-peat is the sports world’s dream accomplishment. In life’s greatest moments, the third time is always the charm. Perhaps that’s why, PepsiCo’s Doritos brand is announcing three amazing finalists whose homemade ads are now set to compete for votes in the last ever Crash the Super Bowl consumer-created advertising contest.

The three Crash the Super Bowl finalists ads are (in alphabetical order by creator last name): 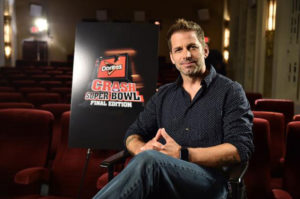 The three finalists will be competing to not only see their commercial aired during the Super Bowl 50 broadcast, but the chance to win a grand prize with Super Heroic ambitions: $1 million and an opportunity to collaborate with director Zack Snyder while working with Warner Bros. Pictures and DC Entertainment. Snyder is the director of the much-anticipated “Batman v Superman: Dawn of Justice,” set for release March 25, 2016, which marks the first time the two iconic Super Heroes will share the big screen.

As a director whose humble beginnings include making TV commercials, Snyder says, “I know firsthand that in the entertainment business, you get a few shots to take a risk and put your talent up against everybody else to see if you have what it takes to make it big. The Super Bowl is one of the biggest stages in the world and having your talent showcased in front of that audience can open a new world of opportunities.  I can hardly wait to see which ad prevails.”

And for the first time — ever — just for making it to the final round, the two finalists whose ads don’t air each will walk off with a whopping $100,000 cash prize, plus this resume-buster: a guaranteed creative gig with the Doritos brand. 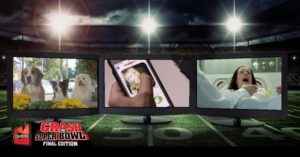 These three finalists have been selected from nearly 4,500 submissions representing 28 countries globally.  The obvious question is, “Why three finalists?”

“The majority of people who enter Crash the Super Bowl have similar dreams of building a career in the entertainment industry and hope to use the contest as a stepping stone,” said Jeff Klein, vice president of marketing, Frito-Lay. “So we thought for our last ‘Crash,’ less finalists was more. It’s the chance to laser-focus the spotlight on the very best of the best, and ensures all of our finalists walk away with truly life-changing opportunities.”

Now through Jan. 31, 2016, fans can vote for the best of the three finalist commercials.

The winning ad — selected by fan votes — will air during the Super Bowl 50 broadcast on CBS on February 7, 2016.  As a nod to the fans who helped make Crash the Super Bowl such a phenomenal success, and in celebration of the Doritos brand’s 50th anniversary in 2016, US consumers who vote online using codes from specially marked Doritos products will be entered for the chance to win tickets to Super Bowl 50 and other golden prizes. 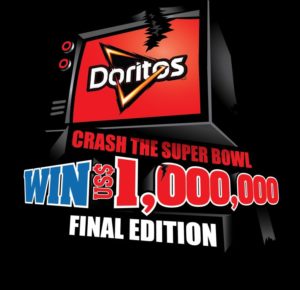 The three finalists were narrowed from 50 semi-finalists by an experienced, qualified panel of judges, including executives from the Doritos brand and top advertising and marketing professionals.

“The biggest thing for me is that this is the last call — the last chance,” says Klein. “The Doritos brand created a whole industry around user-generated content.  We were imitated but never replicated.  We were the only brand willing to take this risk year after year. We had no safety net.”

The three finalists will be invited to attend Super Bowl 50 in the San Francisco Bay Area, where they can watch the game — and, perhaps, their own ads — from a private suite stocked with, of course, Doritos chips.  Only when the ad airs will the three finalists learn which one is the big winner.

What exactly will replace Crash the Super Bowl?

That just might be up to the creativity of Doritos fans. “Planning is most definitely underway,” says Klein, who suggests consumers will, of course, continue to play a role in shaping the brand.  “We will look for a way to meaningfully crash pop culture. A good idea can come from anywhere.”

Perhaps even from fans. All it takes is one crispy moment of cultural gee-whiz-ness— and, maybe, some Doritos-orange pixie dust.

Doritos Reveal Finalists for the Last Installment of ‘Crash the Super Bowl’ added by Newsroom on January 5, 2016
View all posts by Newsroom →