By Newsroom on February 2, 2015Comments Off on Doritos Reveal the Winner of the ‘Crash the Super Bowl’ Contest 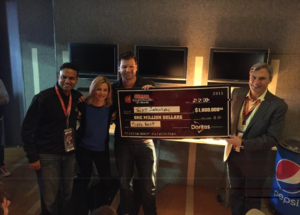 One lucky fan’s life changed in the most incredible way when Doritos awarded Scott Zabielski of Los Angeles the grand prize in this year’s “Crash the Super Bowl” contest – $1 million and a dream job at Universal Pictures in Hollywood.

Zabielski created the best homemade Doritos ad in the ninth edition of the award-winning consumer-created ad contest, racking up the highest number of total fan votes on doritos.com.

Graham Talbot who created “When Pigs Fly” was named runner-up by the Doritos brand, netting Talbot $50,000 in prize money. Both ads aired in front of a global audience during Sunday’s Super Bowl XLIX broadcast, one of the most-watched television events in the world.

‘”Middle Seat’ is creative, bold and original, representing everything the Doritos brand and our ‘Crash the Super Bowl’ contest is about,” said Ram Krishnan, senior vice president and chief marketing officer, Frito-Lay North America. “Rising to the top among nearly 4,900 competitors from all over the world is no easy feat. If the success of our past winners is any indication, Scott’s career is about to take off in the most amazing way, and we can’t wait to see what happens next.”

Zabielski, a Los Angeles-based director and producer turned his “Middle Seat” commercial into reality in a little over a week with the help of family and friends, and a cameo from his young son who played the baby in the spot. The ad, created for $2,000 US, is based on the premise that everyone knows having an empty middle seat next to you on a plane is like winning the lottery – and you’re probably willing to go above and beyond to keep it empty. That is until the perfect seat companion comes by. 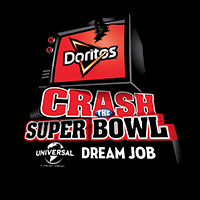 This ninth consecutive year of the Doritos “Crash the Super Bowl” contest once again invited consumers to create and submit 30-second homemade ads celebrating their love of the PepsiCo owned tortilla chips brand. For just the second time in contest history, fans from around the world were invited to participate in the competition, resulting in nearly 4,900 submissions from 29 countries around the world and a record four international finalists.

In early January, 10 finalist ads were selected by a qualified panel of judges, including executives from the Doritos brand, advertising professionals, and actress/producer Elizabeth Banks.

Each of the 10 Crash the Super Bowl finalists won an invitation to Arizona to attend Super Bowl XLIX and watch the game from a private suite, where they tuned in to learn which two finalist ads aired – one was chosen by fan votes; the other by the Doritos team.

The eight finalists whose commercials didn’t air during the broadcast each won $25,000.

Doritos Reveal the Winner of the ‘Crash the Super Bowl’ Contest added by Newsroom on February 2, 2015
View all posts by Newsroom →