By Newsroom on January 3, 2018Comments Off on Droga5 Lifts off with Debut Campaign for Ihop

In the first campaign of its 60th anniversary, Ihop released a brand new TV spot, ‘Pilots,’ to promote its long-running ‘all you can eat pancakes’ promotion.

In the 30-second spot by Droga5 and directed by Tom Kuntz, two pilots perform a safety check before takeoff. “Have you checked the pancake?” the captain asks his co-pilot, replacing the jargon with the breakfast dish. 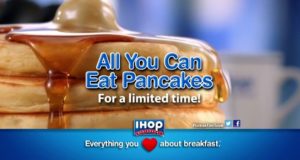 the co-pilot flips a switch. The two perform checks for other “pancake” switches, before giving the final “We’re all pancakes, sir” go-ahead.

“We’ll that sounds flipping pancakes to me, the captain exclaims before announcing to his crew and passengers, “Ladies and gentlemen, we are cleared for pancakes.” The plane then ‘crash-lands’ the parking lot of an Ihop restaurant.

On the spot and campaign, Droga5’s executive creative director Scott Bell said: “Ihop is a brand that always has pancakes on the brain and believes that everything would be better if it were all about pancakes. Knowing this, our priority going into this new integrated campaign was to capture this simple truth in just three words: Pancakes, Pancakes Pancakes.” 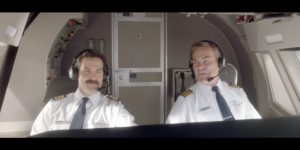 Ihop chief marketing officer Brad Haley said: “The love that people have for the Ihop brand – and especially for our pancakes – was the natural launching pad for our new advertising campaign and the basis of its rallying cry of ‘Pancakes, Pancakes, Pancakes.'”

He said the Droga5 team, is having a lot of fun with the task, “We’re excited to see the campaign come to life across every channel.”

Droga5 Lifts off with Debut Campaign for Ihop added by Newsroom on January 3, 2018
View all posts by Newsroom →