By Newsroom on June 8, 2017Comments Off on Dunkin’ Donuts Unveil Cheeky ‘Snack Election’ Campaign in the UK 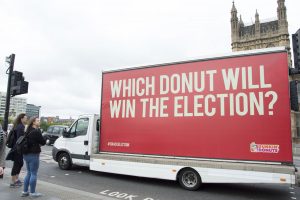 Dunkin’ Donuts is aiming to lighten the mood whatever the political outcome of June 8’s General Election Day with its latest UK campaign, ‘The Snack Election’.

The campaign, created by The Martin Agency London, revolves around an alternative public vote, this one around four potential new donuts, one of which will end up going on sale.

The four donuts up for election are The Blue Donut, The Red Donut, The Green Donut and The Orange Donut (sound familiar?). 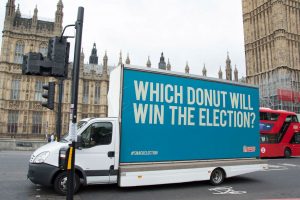 Executed in political campaign style, ‘The Snack Election’ is being held across social media and outdoor on the same day as The General Election.

A lead poster declares: ‘June 8th. Which donut has your vote?’. This is also appearing on an AdVan touring London today on which a second poster asks: ‘Which donut will win the election?’

Other social media executions campaign for a specific colour. There is also an online voting poll open on Facebook for voting day. 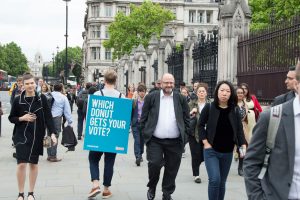 Stephanie Hobart of The Martin Agency London said: “With 24/7 media coverage and split opinions, Voting Day can get a little tense. So inspired by this year’s Snap Election, which took so many people by surprise, Dunkin’ Donuts is having a ‘Snack Election’ to lighten the nation’s mood.”

Dan Fisher, ECD of The Martin Agency London, added: “Any parallels with the other election taking place on June 8th are entirely coincidental and in no way are we inferring that the leaders of all the country’s political parties are donuts. Not at all. Not even in the slightest.”

Dunkin’ Donuts Unveil Cheeky ‘Snack Election’ Campaign in the UK added by Newsroom on June 8, 2017
View all posts by Newsroom →