By on July 20, 2017Comments Off on E.A.T and BBDO Raise Food Allergy Awareness in PSA with Celebrity Chef Ming Tsai

End Allergies Together (E.A.T.), a non-profit organisation that funds research to help solve the growing food allergy epidemic, has joined forces with the award-winning ad agency BBDO New York to develop a public education campaign designed to advise people of all ages about the life-threatening dangers people with food allergies face every time they eat.

The PSA “Could You EAT?,” airs online today and begins airing in movie theatres on Friday, July 28. It stars James Beard Award-winning chef Ming Tsai and is dedicated to the memory of Oakley Debbs, an 11 year-old boy who lost his life to nut allergies, as well as everyone who has lost their life to food allergies. E.A.T. has also launched a text-to-give campaign, in which individuals can text “CURE” to 80077 to donate to research for a cure.

Food allergy is a growing epidemic affecting 220 million people around the world. One in 12 children are diagnosed in the United States and the number is doubling nearly every decade. Every two minutes someone visits the emergency room due to a food allergy-induced, life-threatening anaphylactic reaction. E.A.T. hopes the new PSA campaign will educate broader audiences about the dangers of food allergies and encourage people to donate to much-needed research to help the millions of people who are one bite away from a reaction.’

“After watching this PSA, we hope people of all ages will understand the severity of food allergies and the risks those affected face every single time they eat,” said E.A.T. co-founder Elise Bates, whose 12year-old daughter has a severe food allergy. “People with food allergies can look fine one minute but then be in a life-threatening situation the next, after just one bite of the wrong food. It’s terrifying. We need to find better treatments.”

BBDO created the “Could you EAT?” PSA to show people what it’s like to live with food allergies. The 60 second PSA portrays a poisonous food truck in New York City, and captures real-time reactions from people who learn that they can order dishes from this food truck that “could” be life-threatening. Chef Ming Tsai, known for his restaurants Blue Ginger and Blue Dragon in the Boston area, appropriately plays the chef of the food truck. 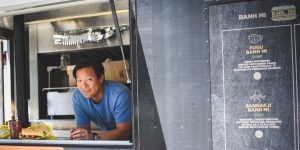 Tsai developed the Food Allergy Reference Book, a pioneering system that creates safeguards to help food-allergic people dine safely. For four years, Ming worked with Massachusetts Legislature to help write Bill S. 2701, which was signed into law in 2009. This groundbreaking legislation, the first of its kind in the U.S., requires local restaurants to comply with simple food allergy awareness guidelines. Eight major food allergens – milk, egg, peanut, tree nuts, wheat, soy, fish and crustacean shellfish – are responsible for most of the serious food allergy reactions in the US.

The spot ends with a call-to-action to donate and help “fund the research to find the cures.” Said Kirsten Flanik, President, BBDO New York which created the new PSA: “The potential dangers of food allergies are a significant, under-publicised issue and one that impacts many of us here at BBDO. We were happy to lend our volunteer support.”

Merrill and Robert Debbs’ son Oakley suffered a fatal anaphylactic reaction from a previously diagnosed mild nut allergy. They founded the non-profit organisation Red Sneakers for Oakley to help raise awareness about asthma and food allergies, specifically nut allergies, through the creation of educational programs and community outreach. They also encourage people to wear red sneakers in honour of Oakley, who loved wearing them in his many sporting events.

“Oakley ate one bite of cake that contained nuts and had an allergic reaction that hours later took his life,” said Bates. “We support the Debbs’ efforts to raise awareness through Red Sneakers for Oakley, and they support E.A.T.’s efforts to fund critical research so that no other parent has to lose their child to a bite of common food.”

Since E.A.T. was launched in 2015 to help the significant gap in research funding, the non-profit organisation has raised $1.4 million. To date, E.A.T. has funded five promising research studies by scientists seeking food allergy treatments and cures. E.A.T, which donates 100% of net proceeds, is the only food allergy organisation solely committed to funding research.

E.A.T and BBDO Raise Food Allergy Awareness in PSA with Celebrity Chef Ming Tsai added by on July 20, 2017
View all posts by →