By Newsroom on January 22, 2016Comments Off on Elvis McGonagall Provided Sweet Poetry For Laphroaig’s New Ad

Entitled ‘An Ode Tae Laphroaig,’ the film features a poem written and performed by Elvis McGonagall, the award-winning Scottish poet, who is also a stand-up comedian and a poetry slam world champion. Laphroaig will be running tasting events on Burns Night, and the film will be shown as part of these celebrations and shared across global social media channels. 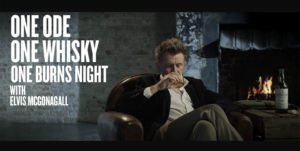 Greg Saunders, creative director and co-founder of White Label, said; “The heart of our Opinions Welcome campaign is the idea that everyone has their own description of Laphroaig, and these descriptions, like the polarising liquid, are often unexpected and invariably fall outside of the standard whisky lexicon.

Rabbie Burns is famous for his odes to objects like haggis and mice, so an ode to Laphroaig seemed like an ideal accompaniment to any Burns Night celebration. Elvis was given free rein to write whatever he wished – so this is his totally honest opinion. Phrases like “Aw’ storm-lashed-sea-spray-smoky-salt” and “A muckle skelp about the head, pure radge that Laphroaig” have given us some seriously alternative tasting notes!”

Elvis McGonagall added; “Having written pieces to order for a BBC Radio 4 programme for several years, and many other commissioned poems generally, I’m used to writing about subject matter that I sometimes initially know very little about. That wasn’t the case here. I’m fond of peaty Islay whiskies generally – so I like a Laphroaig, but appreciated the fact that if I didn’t like it I could say so.”