By Newsroom on April 2, 2014Comments Off on evian Debuts Short Film “The Amazing Baby & Me 2” Featuring Spider-Man

evian Natural Spring Water announced the launch of its short film “The Amazing Baby & Me 2,” which stars pop culture icon, the amazing Spider-Man.

Set in the streets of New York, NY, “The Amazing Baby & Me 2” features the comic book favorite, and a very special guest – his inner child. The campaign follows the brand’s 2013 viral ad sensation, “Baby & Me,” and debuts on evian’s YouTube channel.

Produced by award-winning agency BETC Paris, and directed by Tomas Skoging, the film is an extension of evian’s Live Young lifestyle message: youth is not a matter of age, it’s an attitude.

“evian is thrilled to partner with Sony Pictures to bring our youthful campaign message to life, with the help of one the world’s most iconic comic book heroes,” said Olga Osminkina-Jones, Vice President of Marketing for Danone Waters of North America, evian’s parent company. 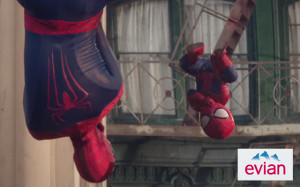 “Through our consumers’ excitement and support, evian’s ‘Baby & Me’ campaign became a viral phenomenon following its debut, becoming the #1 watched brand ad on YouTube in 2013.  We hope this sequel will do the same or more.”

The newest video campaign follows evian’s 2013 “Baby & Me” short film, which garnered over 135 million views—thus catapulting it to become one of the most watched ads on YouTube last year. Prior to “Baby & Me,” the brand had a record-breaking debut for its “Roller Babies” campaign in 2009, and in 2011 for the “Baby Inside” campaign.

evian will launch a digital campaign in support of “The Amazing Baby & Me 2,” which will also feature Spider-Man.

The next installment of the Spider-Man film series, “The Amazing Spider-Man 2” hits movie theaters worldwide on April 16, and arrives stateside on May 2.

evian Debuts Short Film “The Amazing Baby & Me 2” Featuring Spider-Man added by Newsroom on April 2, 2014
View all posts by Newsroom →