By Newsroom on July 24, 2014Comments Off on Evian to Help Travellers Beat the Heat in Three-Year Deal with TfL 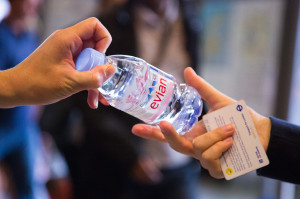 Evian has inked a three-year deal with Transport for London to give flustered travellers on the London Underground free bottles of water during the warm summer months.

The brand has offered 250,000 bottles of Evian water to TfL to hand out at some of the busiest stations this summer, as the network pushes its ongoing Beat the Heat and Travel Better London campaigns.

The campaigns aims to raise awareness of how passengers can help to reduce delays by making small changes to their travel habits.

Sophie Brooks, Evian senior brand manager, said: “We are delighted to have teamed up with Tfl to give overheated commuters some Live Young refreshment. It is really important to stay hydrated during the hot weather so it is great to have the chance to help Londoners keep cool.”

Phil Hufton, London Underground’s chief operating officer, said it was “grateful to Danone [owner of the Evian brand] for supplying customers with water” while it works towards its 2016 target of having 40 per cent of the network served by air conditioned trains.

Evian to Help Travellers Beat the Heat in Three-Year Deal with TfL added by Newsroom on July 24, 2014
View all posts by Newsroom →