Exciting Innovation Causes a Media Storm (In a Tea Cup)

By Newsroom on October 21, 2016Comments Off on Exciting Innovation Causes a Media Storm (In a Tea Cup) 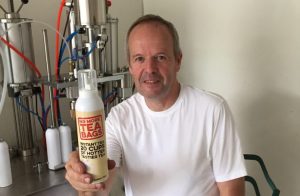 When drinks entrepreneur Guy Woodall began brainstorming the concept for No More Tea Bags back in 2014 little did he imagine the media storm that would erupt when the brand finally launched last month, causing one of the biggest food and drink PR frenzies of 2016.

From national newspapers (including The Daily Mail, Daily Mirror and Metro) and influential food bloggers, to radio and TV shows (including Five Live and Sunday Brunch) everybody wanted their say on the brand aiming to revolutionise the way we drink tea.

It wasn’t just in the UK where No More Tea Bags caught people’s attention either. Alongside the hundreds of in print articles that appeared worldwide, news channels from as far away as Los Angeles and Japan picked up the story.

Whilst it’s fair to say the drinks have split opinions across the globe, the hysteria caused by their launch, the innovation behind the brand’s patent technology and the range of flavours available, heralds a bright future for No More Tea Bags.

What is All the Fuss About?

No More Tea Bags is based on a new patent pending technology which allows for high quality liquid teas to be contained in an aerosol style recyclable can. 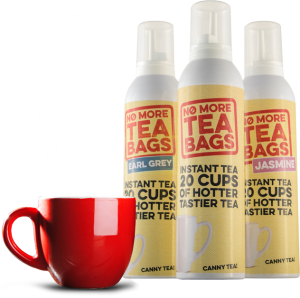 This means tea can be dispensed into a mug, hot water and milk added and the perfect cup of tea created without the need for waiting for brewing (or mashing depending on which part of the country you’re from) or having to mess about with and dispose of tea bags.

It’s not just the traditional tea market that No More Tea Bags is tapping into. Alongside Original and Earl Grey varieties, Guy is hoping to appeal to the ever growing green tea market with a Jasmine offering. The drink captures the taste of high quality jasmine green tea in this convenient and easy format and, as with the Earl Grey version, is created using leaf tea, rather than fannings.

Exciting Innovation Causes a Media Storm (In a Tea Cup) added by Newsroom on October 21, 2016
View all posts by Newsroom →