By Newsroom on February 16, 2015Comments Off on Ferrero Mourns the Loss of its Founder Michele Ferrero 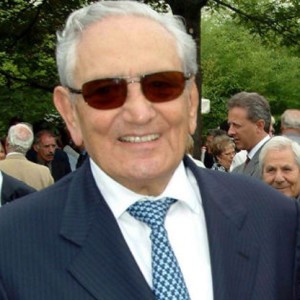 Michele Ferrero, owner of the Ferrero confectionery Group, passed away at his home in Monaco at the age of 89 on February 14, 2015. His wife, Maria Franca, and son, Giovanni Ferrero, CEO of the Ferrero International, were by his side.

Ferrero was founded in 1946 in Alba, Italy, in the northern region of Piemonte.  Michele assumed the leadership of his family’s company in 1949 and has served as the creative intellect ever since.

Michele Ferrero showed great talent, combining experimentation and passion, innovation and tradition, while managing to foresee the needs of the consumer and creating new categories of products. He is the inventor of products beloved by consumers worldwide: Nutella, Tic Tac, Ferrero Rocher and Kinder.

Thanks to his genius and tireless contribution, Ferrero today is one of the principal confectionery groups of the world. With over 34,000 collaborators, it is present in 53 countries and has 20 factories, of which three are Social Enterprises, and nine agricultural companies around the world.

A hallmark of his corporate social responsibility philosophy, Michele founded the Ferrero Foundation in 1983 in Alba, Italy where the company has its roots.  Guided by its motto — “Work, Create, Donate” — it is chaired by his wife, Maria Franca, with great talent and passion. The Foundation has a two-fold purpose:  of caring for former Ferrero employees, and of promoting cultural and artistic initiatives.

In 2005 Michele created the Ferrero Social Enterprises, presently located in India, South Africa and Cameroon.  These are fully-fledged businesses but operate with a social spirit. They aim to create job opportunities in underdeveloped areas in emerging countries, while at the same time, to implement projects and initiatives that promote the education and health of children in the areas where the businesses are based. 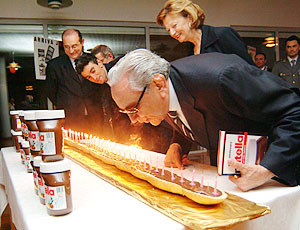 In 1971, Michele was knighted Cavaliere del Lavoro, a prestigious recognition of his contributions to labor in Italy.  In 2005, he was awarded Cavaliere di Gran Croce in acknowledgement of  his civic and social commitment.

His son, Giovanni Ferrero, CEO of the Group, will continue to lead the Company, seeking continued growth while keeping alive the vision, innovation and social motivation inspired by Michele and strongly embodied by the Ferrero family.

Still in 2005, the President of the Republic Carlo Azeglio Ciampi awarded Michele Ferrero, by which time he was eighty years old, the title of the Cavaliere di Gran Croce, for his civic and social commitment.

Thanks to Michele, today like yesterday, social responsibility is in the Group’s DNA: product freshness and the highest quality, careful selection of the best raw materials, sustainable agricultural practices, care for its employees and initiatives to benefit local communities, have become some of the key elements of the Group’s success.

Ferrero Mourns the Loss of its Founder Michele Ferrero added by Newsroom on February 16, 2015
View all posts by Newsroom →