By Newsroom on November 26, 2015Comments Off on Finalists Revealed in Carlsberg’s Cheers to Green Ideas Award 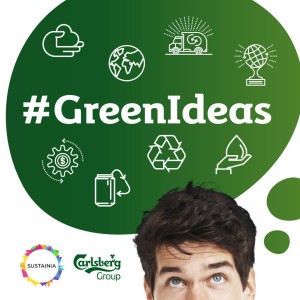 Cheers to Green Ideas was a crowd-sourcing campaign by Carlsberg, which successfully attracted more than 160 ideas from 33 countries. The winners will be announced at the Sustainia award ceremony on 6 December.

During the three-week submission period for the “Cheers to Green Ideas” competition from 28 September to 16 October 2015, 162 ideas were contributed by organisations, companies and members of the public from around the world about how to make Carlsberg beer more sustainable. The competition is a partnership between Copenhagen-based think tank Sustainia and the Carlsberg Group.

Ideas were submitted by entrepreneurs and consumers from 33 countries, showing that inspiring sustainability innovation transcends cultures and borders. The six finalists were selected from the 162 ideas through a rigorous process whereby a Carlsberg jury consisting of representatives from research & development, marketing, sustainability, innovation and supply chain discussed and evaluated the ideas extensively.

The ideas include the innovative use of our packaging materials, using our by-products in a new way and even an idea for using algae to produce biomass at our breweries.

“I’m very excited about the many ideas we received and look forward to exploring how we can use them in our quest to make our beer more sustainable, together with the winners. The global reach and interest in the competition shows that by engaging with our stakeholders in new ways, we can get creative sustainable ideas into the business,” says Charlotta Lyon, Vice President for Sustainability at the Carlsberg Group, who will be presenting the awards at the Sustainia ceremony.

Two awards will be presented on 6 December:

The Cheers to Green Ideas Award: Aimed primarily at established companies or entrepreneurs with a viable sustainability concept. The winner receives USD 20,000 and the chance to collaborate with Carlsberg experts and partners in the Carlsberg Circular Community. The three finalists are:

The JC Jacobsen Special Award: Aimed primarily at consumers (fun, engaging, behavioural change-based ideas). The winner receives USD 10,000 and the chance to collaborate with Carlsberg experts and partners in the Carlsberg Circular Community. The three finalists are:

Finalists Revealed in Carlsberg’s Cheers to Green Ideas Award added by Newsroom on November 26, 2015
View all posts by Newsroom →