By Newsroom on December 11, 2015Comments Off on Peter Schmeichel Fronts Carlsberg’s Probably Campaign for UEFA Euro 2016 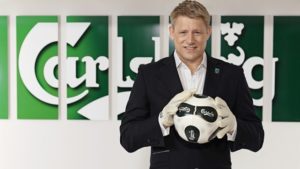 Ahead of the star studded UEFA Euro 2016 final draw in Paris on 12 December, Carlsberg, the Official Beer to the UEFA Euro 2016, announced its marketing campaign for the tournament in France next summer.

Carlsberg’s promise for the tournament will be to “do it better for the fans”. The campaign is built around Carlsberg’s well known ‘probably the best’ universe and will deliver on this by creating probably the best prize ever for a football tournament and pioneering a new digital platform for live consumer engagement.

The campaign will be fronted by Carlsberg’s Global Brand Ambassador Peter Schmeichel, who in true Carlsberg style, will take part in a series of events and supporter led activities in and around the final, with fans being given the chance to meet the great Dane himself.

Peter Schmeichel, Global Ambassador, Carlsberg: “As I see it, it’s the most unpredictable Euro for many years. Even the usual heavyweights have had to fight hard for their spots in the tournament and the outcome is as unpredictable as in 1992. The final draw on Saturday will determine how tough the competition will be. Whatever the outcome, I have worked with Carlsberg’s marketing team for quite some time and Carlsberg not only has a fantastic track record but is determined to make this the best Euro ever for the fans.” 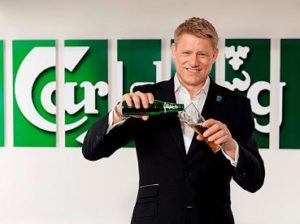 Engaging fans through digital channels will be top priority for Carlsberg. The most ambitious digital campaign from Carlsberg during any UEFA Euro will result in a new series of cutting edge digital activations, which will engage consumers on a daily basis prior to and during the tournament.

For the first time ever fans around the world fans will have the chance to vote for their official Carlsberg Man of the Match for each of the tournament’s 51 games via social media in addition to the online voting system at UEFA.com. The new voting mechanic will tap into real-time fan conversations and provide an easy-to-access voting platform, giving them a greater say in who wins each coveted award.

What’s more fans will have the opportunity to play on a UEFA Euro 2016 pitch, with a consumer competition to have a once in a lifetime experience at Stade de Lyon, the day after the Semi-Final match is played. Winning fans will get a VIP experience, after attending the semi-final match the night before, fans will take part in fun football themed activities such as Crossbar Challenge and Bungee Football with footballing legends of past UEFA Euro 2016 tournaments.

An ‘always on’ social media and integrated PR campaign will run for the duration, putting fans at the heart of the activation including bringing the official UEFA Euro 2016 Trophy to the UK, Ireland, Belgium and Denmark; consumer ticket competitions; and providing access to Carlsberg Global Ambassador Peter Schmeichel.

In line with its commitment to promote responsible consumption and to help fans celebrate responsibly, Carlsberg will run a number of awareness activities that encourages fans to enjoy its beers responsibly. Activities will take place within the fan zones in France and other markets.

To continue the theme of ‘making football better for the fans’, a global TV commercial celebrating supporters will also air ahead of the tournament.

Richard Whitty, Senior Marketing Manager Football, Carlsberg comments: “As with all our football partnerships, our ambition throughout UEFA Euro 2016 is to the make football better for the fans. We have a number of clever campaigns that will make fans feel more involved in the tournament such social voting, meeting the trophy and legends, plus actually getting fans onto the pitch where their heroes have played in the Semi-Final only the day before. There will be more to come as we get nearer to the tournament, but we’ll be doing everything with the usual Carlsberg wit, humour and football insight.”