By Newsroom on March 14, 2018Comments Off on Four in Ten Brits Willing to Eat Lab-Grown Meat and Fish Within 10 Years 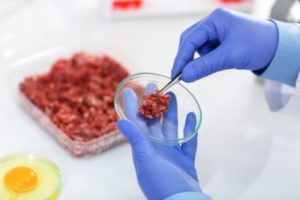 More than four in ten (41%) of Brits think we’ll be eating lab-grown meat and fish within just ten years, according to research by the human experience company, Starcom.

Lab-grown meat and fish, also known as cultured meat, is grown in a cell culture instead of inside of animals. It has been developed for nearly twenty years with NASA being one of the earliest groups to research its viability in 2002.

Shortages of meat and fish is the top reason why people say they would eat lab-grown produce, followed by environmental and sustainability concerns. This isn’t surprising as currently around 18% of global greenhouse gas emissions are produced as a result of the meat industry.

Pescetarians and vegetarians are the most confident with the speed of adoption with 59% and 51% respectively believing it’ll be on our plates within 10 years.

Starcom surveyed 2,000 people as part of its ongoing ‘Future of…’ thought-leadership series, which is based on rich insight into consumer trends and how emerging behaviours will impact brands and society as a whole.

With rising food prices already rising quickly, 90% of Brits that do a weekly shop say they would start cutting back on spending if they were to rise again. Fresh meat and fish will be culled from the basket before fresh fruit and veg.

It’s clear that for lab-grown meat and fish to become an accepted part of our diet, it needs to mimic closely the original. The most important quality for consumers is taste, followed by texture, smell and then its look.

There is still education needed for the majority of Brits to get used to the new food type. Currently 42% of people would eat lab-grown meat or fish in a restaurant, which drops slightly when it comes to fast food restaurants (37%).

“The research is a fascinating look into the motivations and perceptions of consumers. For a food source that only really started proper development in the early noughties to have such acceptance already is amazing. It appears that this willingness to try something very new, and out of the norm, comes from a desire to help the planet and reduce the strains of meat production,” said Jodie Stranger, Starcom UK Group’s chief executive and president of global network clients.

“Although greater education about the benefits of lab-grown produce is necessary, Brits are responsive. Nothing can undermine the need for a great tasting and good quality meal. However, with pressures on the industry to source the sheer quantity needed to feed our appetites and for consumers to pay for it, we’re going to see a lot more on interest in this area. Brands that create a great product and manage to effectively educate the market will reap the rewards.”

Four in Ten Brits Willing to Eat Lab-Grown Meat and Fish Within 10 Years added by Newsroom on March 14, 2018
View all posts by Newsroom →