By Newsroom on September 10, 2015Comments Off on Got Milk?’s New California-Inspired Milk Pairing Ad Aims to Excite & Delight

The California Milk Processor Board (CMPB), creator of the iconic got milk? campaign, has launched a new statewide advertising campaign that taps into Californians’ leading sense of adventure and discovering the next food trend.

Entitled “Food Loves Milk,” the campaign highlights milk’s essential role in food pairings – from the classically traditional such as milk + peanut butter and jelly – to new pleasingly bold pairings that reflect the popularity of fusion cuisine and the mainstreaming of ethnic foods.

“The new ‘Food Loves Milk’ campaign showcases milk’s versatility and unique ability to complement a range of exciting flavors, from savory to spicy to sweet,” said Steve James, executive director of the CMPB. “For generations, milk has had a healthy relationship with food, pairing perfectly with traditional favourites. These new innovative milk pairings, created by California chefs, offer a delicious new way to enjoy milk while celebrating California’s rich and evolving culinary heritage.”

“It’s widely accepted that adding an unexpected ingredient – such as a touch of salt to watermelon – can enhance flavours in notable ways,” added James. “We’ve applied that same principle to milk and our new food pairings. Whether you’re enjoying a rich peanut butter and jelly sandwich, or spicy eggs with sriracha, a refreshing glass of milk is the ultimate pairing beverage.”

Hailing from a wide range of culinary backgrounds, California chefs created milk pairings that include Ricotta Pancakes, paired perfectly with a glass of milk for a satisfying breakfast from Mario Sabatini of Santa Monica’s Italian Forma; a savory Korean Fried Chicken from Dennis Lee of Namu Gaji in San Francisco, and a delectable Mexican Chocolate Bread Pudding from Isabel Cruz of Isabel’s Cantina in San Diego. 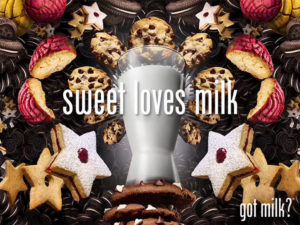 These tasty milk pairings have more going for them than just flavour – in fact new research suggests that fat naturally occurring in food, such as the type found in milk, may enhance the appeal of some foods by adding to the overall sensory profile. And while the ever-changing world of food and health has seen trends come and go – from Cronuts to the fat phobia craze– a more moderate view is coming back into favour. No wonder experts are predicting “fat is back.”

While scientists have thought for years that fat provides texture to food but no taste, research published in the journal Chemical Senses debunks this theory suggesting that humans can indeed taste fat. Not only does fat play an important role in our diet, providing satiety benefits, but according to research lead professor Richard Mattes, director of the Ingestive Behavior Research Center at Purdue University, fat may be the new “sixth” taste sense, adding to the five established taste senses– sweet, salty, savory, bitter and umami. The finding could explain why fat-free foods are not as satisfying as the full-fat versions.

Naturally delicious, a glass of milk – in varieties ranging from whole to skim – is linked to good nutrition making it a beverage you can feel good about serving at every meal. “An 8-ounce glass of milk provides 9 essential nutrients, including 8 grams of high-quality protein. The protein in milk, as well as the fat in the non-skim varieties, helps increase satiety, or a feeling of fullness, which is beneficial for weight management and overall meal satisfaction,” says Patricia Banan, MS, RDN, author of Eat Right When Time is Tight.

With dishes ranging in taste from savory to sweet, the new milk pairings from culinary tastemakers across California are ideal for any meal occasion. Leveraging the natural wholesomeness of milk and its ability to complement a wide variety of foods, the campaign will invite Californians to broaden their idea of milk and encourage consumption any time of day.

The got milk? campaign is being developed for the general market by advertising partners Goodby, Silverstein & Partners, and under the tagline “Toma Leche” for the Hispanic market by agency Grupo Gallegos.