By Newsroom on August 2, 2018Comments Off on Gourmet Cantonese-British Cuisine Collaboration Arrives at The Pompadour 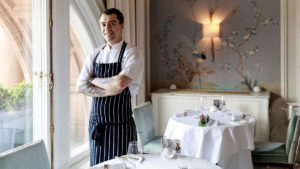 Later in August, the Waldorf Astoria Edinburgh – The Caledonian welcomes Executive Chef, James Wang from its sister hotel in Beijing to co-host a series of Cantonese-British evenings in The Pompadour by Galvin with Head Chef, Daniel Ashmore.

Together the chefs will delight guests with an eight course collaborative tasting menu, served in the beautifully restored Pompadour dining room overlooking Edinburgh Castle. The collaborative dinners will be available in the fine dining restaurant between Wednesday 29thAugust and Sunday 2nd September inclusive.

The launch evening on the 29th August will feature authentic Chinese entertainment and live music to celebrate the coming together of these two highly regarded chefs. The menu has been designed to alternate between the chefs giving each the opportunity to showcase their cuisine using the finest ingredients, highlights from the menu include:

Dale MacPhee, General Manager at Waldorf Astoria Edinburgh – The Caledonian, said: “This is a very exciting opportunity for us to host such a unique gourmet experience in the capital with our sister hotel. The recent launch of Hainan Airlines direct flight between Scotland and China has made the city much more aware of the opportunities to engage this new market and we look forward to our reciprocal visit in the autumn when Dan will co-host a series of dinners in Beijing.”

Brian Tong, General Manager at Waldorf Astoria Beijing, said: “I believe this is a great opportunity for Chef James Wang to bring his authentic Cantonese cuisine to Edinburgh and team up Chef Daniel Ashmore to offer gastronome and discerning travellers an unforgettable dining experience.”

Gourmet Cantonese-British Cuisine Collaboration Arrives at The Pompadour added by Newsroom on August 2, 2018
View all posts by Newsroom →