By Newsroom on November 15, 2013Comments Off on GreenVale Farm Fresh Potatoes Win New Listings with Ocado and Amazon 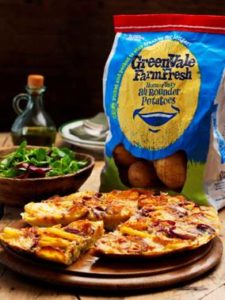 Greenvale, the UK’s leading supplier of fresh potatoes, has secured two new listings through Ocado and Amazon for its branded product, GreenVale Farm Fresh potatoes, so consumers can now order them on line as well as buy them off the shelf at Tesco and Booths.

Marketed as ‘great tasting all rounder potatoes’, GreenVale Farm Fresh were launched exclusively in February 2012 through selected Tesco stores and by November the brand was being rolled out to over 600 Tesco outlets nationwide.  During its first year on sale GreenVale Farm Fresh was credited with helping to bring new shoppers into Tesco’s potato category and since launch over 1 million shoppers have bought the brand.

Greenvale demonstrated its commitment to the brand by investing over £1 million in a nationwide marketing and advertising campaign earlier this year, and plans are in place for an exciting new campaign for 2014.

Leon Mundey, Head of Marketing for Greenvale, commented: “Developing a brand from scratch has been hard work but rewarding. We were determined to create something that would grow the total category, rather than just steal share, and GreenVale Farm Fresh is achieving this.  It’s satisfying to see the hard work all paying off as sales continue to grow and more customers take on the brand.  The new listings with Ocado and Amazon are extremely exciting as they will open the brand up to new consumers and we have seen that once people try GreenVale Farm Fresh, they buy them again and again.”

GreenVale Farm Fresh uses the ‘Jelly’ variety which is exclusive to Greenvale.  It was chosen for its versatility – Jelly can be mashed, boiled, roasted or baked – its light creamy texture and, most importantly its delicious flavour.  To give stand out on shelf, GreenVale Farm Fresh are sold in 2kg mini versions of the traditional paper potato sacks which keep them fresher for longer, are more environmentally friendly than plastic, and are an eye catching blue and green.

GreenVale Farm Fresh retail for around £2.59 per bag. 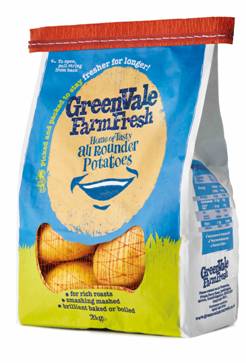