Harp Angel Hitches a Ride in a Taxi with a Difference

By Newsroom on October 21, 2015Comments Off on Harp Angel Hitches a Ride in a Taxi with a Difference

At 10.04pm on a dark October night, the Harp Angel – dressed as a mad scientist – caught the ride of a lifetime after ziplining from Belfast’s iconic Gasworks clock tower, in a nod to an ’80s sci-fi classic.

Waiting to pick him up in his two-seater car was ‘Marty’, a west-Belfast taxi driver with a thick local accent and a glint in his eye. 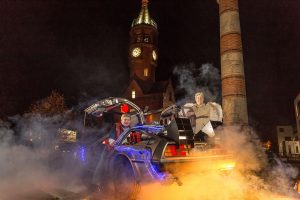 The filmed stunt in honour of Back to the Future Day, created by Harp as a way to champion Northern Ireland’s optimistic spirit and the brand’s unique way of ‘Looking on the Harp side’, featured well-known local actors Dan Gordon and Gerard McCabe as ‘Marty’ and the mad scientist / Harp Angel respectively.

Lisa Ronayne, Brand Manager Europe – Harp, said: “In 1985, two of the most celebrated characters in film history took to the skies in a Northern Ireland-built time machine and travelled thirty years into the future, eventually arriving today: October 21, 2015.”

“At Harp, another iconic Northern Irish brand, we wanted to pay respect to the achievements of these two exceptional pioneers of time travel and their amazing flying machine. We wanted to thank them for their outstanding contributions to science fiction and thought the best way of doing this was by paying homage to their original time-travelling journey which took place at the Hill Valley clock tower in 1955. I look forward to thanking them both in person, in the future, if I haven’t already done so,” added Lisa.

Harp Angel Hitches a Ride in a Taxi with a Difference added by Newsroom on October 21, 2015
View all posts by Newsroom →