By Newsroom on June 2, 2016Comments Off on Havana Club Puerto Rican Rum Rolls Out Market Expansion in the US 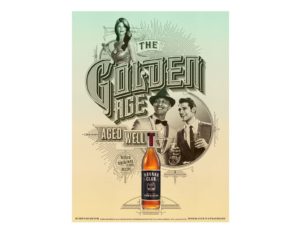 Marking two decades of US presence and celebrating the peak of Cuba’scultural resurgence, Havana Club Puerto Rican rum is rolling out an exciting national market expansion. The expansion features new bottle packaging, the introduction of a dark rum variant, Havana Club Añejo Clásico, to complement the existing Havana Club Añejo Blanco offering, and the launch of a new brand campaign titled “The Golden Age, Aged Well.” The Havana Club Añejo Clásico will make its debut in Florida this June, with expansion continuing throughout the United States this summer.

Following the distribution in Florida, both rums will rollout nationally in Colorado, Georgia, Illinois, New Jersey, Nevada, New York, Pennsylvania and Texas beginning in July and August. The remaining states will start to see Havana Club in their local liquor stores and high-end restaurants in September.

Havana Club rum is based on the original recipe created by the Arechabala family in Cuba in 1934, capturing the exuberant spirit of the Golden Age in Havana, a period of time that spanned from the 1920s, when people flocked to the island during prohibition, through the 1950s when everything stylish and glamorous reigned supreme. Havana Club rums are premium, aged rums, distilled and finely crafted in Puerto Rico, comprised of Havana Club Añejo Blanco and Havana Club Añejo Clásico.

As an ode to the family that produced rum for generations, the crest on every bottle is a reminder of the brand’s gilded origins. Further celebrating the rums’ Cuban historical heritage and the decadence of the island’s best-known era, Havana Club rums will feature brand new packaging design inspired by the brand’s rich history and original packaging to stay true to the brand’s foundation. The sleek, yet timeless-feeling, bottles feature a center seal which has been prominently featured on packaging and advertising since the brands inception in 1934. The crest, created by the Arechabala family, is surrounded by hand-lettered typography reminiscent of this lively, bygone time period.

Enjoyed by visitors to Cuba from across the globe between 1934 and 1960, the original Havana Club was a widely beloved rum and it was Ramon Arechabala himself, great-grandson of the brand’s founder Jose Arechabala, who personally transcribed the recipe that was sold to Bacardi as part of the agreement between the two family companies.

“This is the ultimate convergence of two Cuban families in exile coming together to continue the legacy of this incredible brand and introduce it to a new generation,” said Fabio Di Giammarco, global vice president of rums for Bacardi.  “We are thrilled to launch Havana Club Añejo Clásico and share it, alongside Havana Club Añejo Blanco, with the support of the ‘The Golden Age, Aged Well’ creative campaign, which highlights the stunning Cuban historical period during which this rum was most revered. It is an honor that the Arechabala family has entrusted us to continue their family’s legacy and have no doubt that we’ll be able to bring to life all the things that made it a legendary brand.”

To create Havana Club Añejo Clásico, the rum begins with bases that are mellowed in oak casks between one to three years, before being chosen for selective filtration and blending. Upon blending, the Master Blenders return the rum to oak casks for a second mellowing period of at least three months for additional smoothness. The result is a golden liquid with robust notes of sweet fruits akin to pineapple and apricot, complemented by oaky notes with hints of almond and vanilla.

Each bottle of Havana Club Añejo Blanco is created with only the finest sugarcane molasses and is double aged in oak barrels while the Caribbean climate of Puerto Rico works its magic. The premium rum is made with bases that are aged for a single year, before selective filtration and blending. After they are blended, the Master Blenders return the rum to oak casks for a second aging period of at least two months. The result is a silver liquid with sweet notes reminiscent of tropical fruits and floral notes. 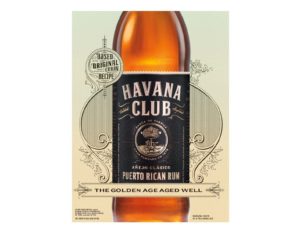 “Our family could not be happier that Bacardi is launching Havana Club Añejo Clásico, which is based on the original recipe created by the Arechabala family in 1934,” said Jose Arechabala, a great-grandson of founder Jose Arechabala Aldama. “Our families knew each other before we were both exiled from Cuba, and with Bacardi being the premiere rum company in the world, it’s only fitting that they continue our legacy by paying proper homage to the capital city of Cuba, a place we once called home.”

Along with the new product and packaging, the brand is also introducing a new creative ad campaign, “The Golden Age, Aged Well,” which evokes the glamorous, effervescent feeling of the Golden Era in Cuba and pays tribute to the historical Cuban Golden Age heritage of Havana Club.  Tag lines for the ad campaign include “The Freedom, The Decadence, The Dazzle, The Glamour.  If Only Someone Had Bottled It,” “Even A Revolution Couldn’t Topple The Rum,” and “Always True To Its Rumba Loving Soul.”

With a focus on Miami, Atlanta, Chicago, Dallas, Houston, San Antonio, Denver, Las Vegas, New York City, and Philadelphia, the advertising campaign will be executed through programmatic buying to distribute high-impact and native media including custom videos and cocktail education, reaching a sophisticated consumer through private marketplaces, geo-based spot and digital radio and mobile location. Out-of-Home advertising will be implemented throughout Miami, Fla.

Havana Club Puerto Rican Rum Rolls Out Market Expansion in the US added by Newsroom on June 2, 2016
View all posts by Newsroom →