Heineken Set To Paint The Town In Toronto

By Newsroom on July 20, 2016Comments Off on Heineken Set To Paint The Town In Toronto

Heineken is set to take over Underpass Park in Toronto on July 21, where the beer brand will host a party and unveil a piece of street art it has commissioned. 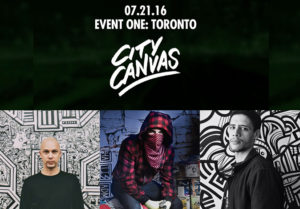 A once-dormant public space under several highway overpasses in Toronto, Underpass Park was revitalized and turned into a public space in 2012 and given a fresh coat of paint by a group of graffiti artists last year. The latter makes it a fitting space for Heineken to celebrate its collaboration with three Canadian street artists: Jimmy Chiale, Hey Apathy! and Whatisadam.

Heineken’s Canadian marketing manager, Kaetlyn Graham, said the brand selected the artists because they use cities as a “creative canvas.”

Globally, Heineken has embraced what it’s calling “city shapers” – people who contribute to the fabric of a city based on their cultural contributions. The “City Canvas” campaign is the local expression of that global platform, which was designed to connect with Heineken’s target of urban males aged 25 to 34.

Graham said the brand chose the unique park in part because the City of Toronto has embraced street art as a way to “beautify” the space. 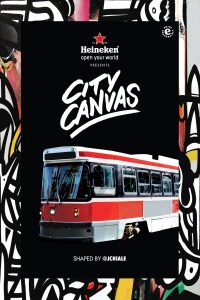 On Thursday night, the three artists will put the finishing touches on a streetcar replica that Heineken tasked them with transforming. The replica itself was made according to measurements provided by the Toronto Transit Commission (TTC). They artists will also be joined by a contest winner Heineken selected after asking its followers on social media to submit artwork using the hashtag #ShapeOurCity.

The finished streetcar-sized artwork will be turned into three different streetcar wraps that will run for eight weeks starting Aug. 1. The wraps will be accompanied by OOH, including wild postings, with an ad buy by MEC.

Heineken is also filming the party to create a video it will share via social media and pre-roll ads.

According to Graham, the only direction the brand gave the artists was to make use of its green brand colour and star imagery – another Heineken brand asset. The company plans to add its branding to the wrap following the artwork’s completion.

As for the streetcar, Graham said the brand chose to utilize it as its canvas for the campaign because the brand sees it as a “staple of Toronto’s urban identity” and a “visible icon of Toronto culture.”

The campaign was conceived by Kinship, a new company that is part of Kyu, the New York-based collective of companies Sid Lee joined in 2015. Kinship handled strategy and creative, while Citizen Relations handled PR and media and influencer outreach for the event.

Heineken Set To Paint The Town In Toronto added by Newsroom on July 20, 2016
View all posts by Newsroom →