By Newsroom on August 24, 2015Comments Off on Heineken to Release Marketing Push to Mark Partnership with Bond Film Spectre 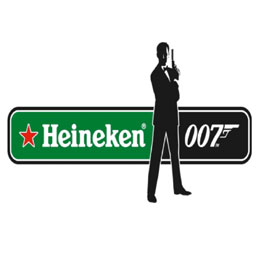 Heineken is releasing a marketing campaign to promote its partnership with Bond film Spectre. Global sponsorship director Hans Erik Tuijt lifts the lid on the brand’s 17 year partnership with the suavest spy in film history.

In the 2012 film Skyfall James Bond was depicted lying in bed with a stunning Bond girl sipping from a bottle of Heineken, a departure for the vodka-sipping spy.

Some purist fans and critics decried it an unnatural choice for the secret agent, most famed for his love of vodka Martinis – shaken not stirred, slamming the product placement. But the partnership helped position Heineken as a premium drink.

Heineken spent $100million on marketing its partnership with the Skyfall film, which included an ad featuring the Bond actor himself, Daniel Craig.

This year, the business is ploughing even more cash into the franchise with a global campaign spanning 85 markets, according to Marketing Magazine.

Heineken has a longstanding relationship with the famous spy, having first partnered with the series since 1997 – Spectre marks the seventh film the beer brand has struck a sponsorship deal with.

Criticism of the partnership or not, the sponsorship has helped drive conversations about the brand. Heineken tracks and measures consumer sentiment that shows Bond positively impacts consumer’s view of the brand.

“Everyone is free to have an opinion but the facts is that Bond is a drinker. He drinks champagne, when he is dressed up in his white tuxedo he will drink Martinis and there are moments when he drinks a beer,” Tuijt says. “If you go back to the books he’s drinking beer. He knows which drink to drink on what occasion.”

To time with the release of the much-anticipated Spectre, set to hit cinema screens in November, Heineken has devised a 360-degree global marketing campaign that Tuijt promises will “surprise” and “excite” customers.

The details of the TVC and the social campaign around it are tightly under wraps ahead of the film release. But Tuijt reveals Daniel Craig will again feature in the ad, which he promises will be bigger and better than before, with an “unexpected twist.”

In 2012 the ad (see above) clocked up more than 24m views on YouTube, the goal is to exceed this.

“The TVC ambition is to reach more than half a billion people. All markets are changing their above the line to the Bond campaign,” he says.

Heineken has streamlined its film sponsorship to make it “sharper” and more targeted to ensure the brand can be the talking point of consumers in multiple markets.

“We used to do partnerships with other brands such as Zoolander and The Matrix. But we’ve sharpened the strategy to ‘fewer, bigger, better’ because we really want to get our whole company, worldwide, behind [the same] big platforms, because in the digital age it’s great if people from the United States to South Africa to Vietnam are talking about one thing – then we are really part of the conversation.” 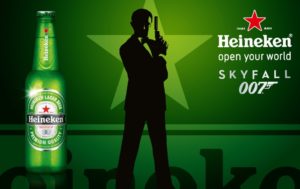 “We’ve chosen Bond because it’s a premium franchise like Heineken, and around the world it’s well known.”

The character is, he asserts, the “ultimate man in the world.”

To kick off the Spectre campaign Heineken will offer Bond branded packs in stores from September containing a free Bond movie downloads plus exclusive never-before-seen content and behind the scenes footage.

Heineken hopes to sell half a billion cases of Bond branded beer worldwide during the campaign.

Can we expect to see Bond enjoying a Heineken in the film?

Heineken to Release Marketing Push to Mark Partnership with Bond Film Spectre added by Newsroom on August 24, 2015
View all posts by Newsroom →