By Newsroom on February 12, 2014Comments Off on Heineken UK Banned From Using ‘Misleading’ Kronenbourg 1664 Ad

Beer and cider producer Heineken UK has been told it must not use an advert for Kronenbourg 1664 that implies that the product was manufactured and brewed in France.

The Advertising Standards Agency (ASA) ruled that both the press and TV ads for the drink were ‘misleading’ as they implied that Kronenbourg 1664 was brewed in France, and that all or most of the hops used in the recipe were grown in France, which was not the case.

Devised by Ogilvy & Mather the campaign, which featured footballer Eric Cantona, focussed heavily on the French origins of the drink, stating: “If you find a better tasting French Beer, we’ll eat our hats.”

The TV ad compared hop farmers in Alsace to footballers in Britain because “they are idolised and adored”.

Two viewers challenged Heineken’s claims regarding the beer’s production in France as they understood that not to be true. 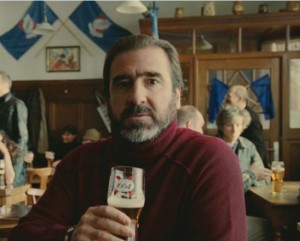 Small print on both the print and TV adverts stated “Brewed in the UK”.

In its adjudication regarding the press ad, the ASA said: “Although we acknowledged Heineken’s arguments as to the beer’s heritage and the French origins of the recipe, we considered that the degree of emphasis in the ad on the connection with France would lead consumers to believe that the entire brewing and manufacturing process took place in that country.

“The ad contained small print stating that the beer was brewed in the UK, but we considered that contradicted rather than clarified the main message of the ad.”

Commenting on the TV ad, the ASA stated: “We understood that the Strisselspalt hop was only one of several hops used to create Kronenbourg 1664. We considered that the degree of emphasis in the ad on the contribution of French hops to the beer, including the statement that the hop farmers in Alsace “are the men that grow the noble hops that make Kronenbourg the taste supreme …” implied that all, or a significant majority of, hops used in the brewing process were sourced from France.”

Heineken said that it was disappointed with the ruling and stated that it has never made any secret that Kronenbourg 1664 is brewed in the UK or that Strisselspalt is not the only hop used. The company has submitted a request to ASA for the ruling to be reconsidered.

The ad has been banned from broadcast in its present form.