By Newsroom on July 11, 2016Comments Off on Heineken Unveils Campaign Supporting Restoration of Miami Stadium 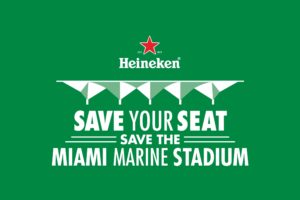 Miami Marine Stadium was once among America’s most iconic destinations, hosting on-the-water performances from legendary acts like the Rolling Stones and The Beach Boys. The stadium has gone unused for years, and now, Heineken is launching a unique campaign to help restore this crucial piece of Miami culture for generations to come.

Heineken, the beer that’s enjoyed in the most cities around the world, is supporting the restoration of Miami Marine Stadium as part of its “Cities” campaign, which aims to make great urban areas even greater. Heineken — in partnership with the National Trust for Historic Preservation, the City of Miami and Indiegogo — is launching a crowdfunding campaign that will propel the stadium’s restoration to its next phase.

The Indiegogo campaign can be found here. To make the greatest impact, Heineken is investing marketing resources to promote the campaign and matching up to the first $20,000 that is contributed within the first two weeks. Heineken is also rewarding unique perks to contributors; in fact, Heineken’s #SaveYourSeat program will award select donors with actual seats that are being removed from the stadium to make way for renovation.

“For many years, Miamians have shown an incredible passion and strong desire to restore Miami Marine Stadium, and that’s why it’s a perfect fit for the Heineken Cities campaign,” said Ralph Rijks, senior vice president of marketing, Heineken USA. “We’re supporting amazing projects across the country in an effort to make great cities like Miami even greater. By creating a movement in South Florida and beyond, we hope to reenergize the effort to bring the stadium back to life and ready for future generations to enjoy.”

A massive concrete structure featuring more than 6,500 seats, Miami Marine Stadium was constructed in 1963 and is considered a monumental achievement in civic architecture and modern construction. Uniquely situated on the edge of Biscayne Bay, it hosted events ranging from high-speed boat races, to concerts featuring the biggest names in music. But since 1992, when Hurricane Andrew greatly affected Miami, the stadium has been abandoned, save for the graffiti artists who have transformed it into their canvas. 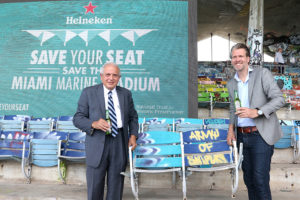 “Miami Marine Stadium is one of South Florida’s most distinctive landmarks, emblematic of Miami’s rich culture, diverse history and strong relationship to the water,” said Stephanie Meeks, president and CEO of the National Trust for Historic Preservation, a longtime advocate for the stadium’s restoration. “So we are delighted to partner with Heineken and Indiegogo on the ‘Save Your Seat’ campaign. This is a chance for everyone to get involved — through donations large and small — to contribute to the next phase of the stadium’s future and to help save a place that matters.”

In addition to creating the Indiegogo campaign and providing $20,000 in matching funds, Heineken is planning on-the-water events, retail activations and a concert that will help raise awareness of the Miami Marine Stadium project.

Heineken’s support of the stadium is part of its larger Cities campaign, which has also been seeking out innovative projects and ideas for improving other key U.S. cities. The company will soon create additional Indiegogo campaigns for selected projects, to be released later this year.