By Newsroom on January 7, 2014Comments Off on Heinz Unveils Personalised ‘Get Well’ Soup Campaign for Charity 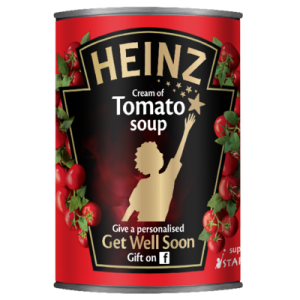 Heinz has unveiled a campaign allowing users to personalise ‘Get Well’ tins of both tomato and chicken soup, which can be sent to an ill friend or family member.

The company has teamed with Starlight Children’s Foundation for the campaign, to raise money to provide entertainment for poorly children in hospitals and hospices across the UK.

The Heinz ‘Get Well’ Soup campaign will be supported by PR, social media activity and TV advertising with a seven second tag on the Heinz Soup ‘I Love Winter’ advert for two weeks from 6 January.

Bobbie Staden , marketing executive at Heinz, said: “We’re thrilled to be working with Starlight again to bring smiles to the faces of children across the UK. Due to the success of our previous ‘Get Well’ Soup campaigns, we wanted to bring it back but also add something extra to the Starlight Children’s Foundation partnership.

“Heinz consumers can help those who really deserve to have their spirits lifted and we’re certain that Starlight storytellers will provide them with lots of laughter.”

Each personalised can of soup can be made on Facebook, and costs £3.99.

Heinz Unveils Personalised ‘Get Well’ Soup Campaign for Charity added by Newsroom on January 7, 2014
View all posts by Newsroom →