By Newsroom on April 14, 2015Comments Off on Hendrick’s Gin Launches Hendrick’s Air

Hendrick’s Gin is launching Hendrick’s Air. This new ambitious venture will commence with its flagship (and only) air craft: a massive dirigible christened The Flying Cucumber.

“We have been continually surprised by the odd popularity of our unusual cucumber-infused gin,” explained Hendrick’s National Brand Ambassador Jim Ryan, “So taking on the challenge of air travel seemed like the next logical step.”

Positioning itself against ordinary modes of travel, which Mr. Ryan stated “have devolved into a mundane state of expeditious predictability,” Hendrick’s Air will launch its fleet based on a single and majestic dirigible.

In contrast to the hub-and-spoke structure of conventional airlines, all Hendrick’s Air flights will depart and arrive from the same point, which Mr. Ryan explains, “emphasizes the excitement of the flying experience itself. As we see it, flying in excess of 500 miles per hour becalmed by such conveniences as in-flight TV and noise-canceling headphones feels no different than sitting in one’s living room. We are offering a return to the true glamour of flight.” 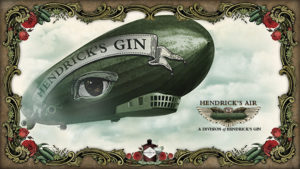 The 130-foot long, 44-foot tall Flying Cucumber is adorned with a giant “eye in the sky” which exudes both whimsy and a dashing sense of purpose. It will launch with a coast-to-coast voyage beginning in April and culminating in August, granting expeditionary flights to fellow unusualists in Los Angeles, San Francisco, Austin, Dallas, South Florida, New Jersey, New York, Philadelphia, Boston, Ann Arbor, Indianapolis, and Chicago.

The carrier’s cucumber motif and insistence on dirigible flight were inspired by the gin’s most prominent note of flavour – namely its infusion of cucumber essence (all the world over, Hendrick’s & Tonics are served with slices of cucumber rather than the perfunctory lime.)

The Hendrick’s dirigible has been engineered to follow what Ryan describes as “a slow and low” flight pattern, maintaining a “civilized speed of 35 mph.” The Flying Cucumber’s sub-1000-foot cruising altitude allows for what Mr. Ryan termed “an invigorating view of the marvels below.”