By Newsroom on March 26, 2013Comments Off on Ice Cream Gets Dressed Up With Googly Eyes 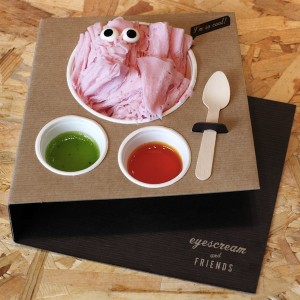 Of which, the dessert has a unique texture, that’s somewhere between a sorbet and ice cream, and may be considered “ugly” looking to some.

“An amorphous mass of ice cream with lots of sauces and toppings falling above and the sides,” according to the designers Merche Alcalá and Marion Dönneweg of m Barcelona, who told MOCO LOCO.

To make the ice cream more aesthetically appealing, they decided to give the sweet treat a creative spin—by separating its toppings, and adding two sugar googly eyes.

The googly eyes gave the monstrous-looking dessert personality; thus, the name ‘Eyescream’. A monster and character were also created after each flavor, paired with phrases such as, “Don’t judge me by my color.”

This is an example where playful branding makes up for an unattractive product—what do you think?

Ice Cream Gets Dressed Up With Googly Eyes added by Newsroom on March 26, 2013
View all posts by Newsroom →