By Newsroom on November 29, 2017Comments Off on Iconic M&M’s Holiday Ad Finally Gets a Sequel, 21 Years Later

Every Christmas since 1996, the M&M’s Brand has given its fans around the world the same gift – the iconic :15 second television commercial called ‘Faint.’ The beloved commercial created by BBDO features M&M’s spokescandies Red and Yellow interrupting Santa while he’s delivering gifts – causing both Red and Santa to faint. 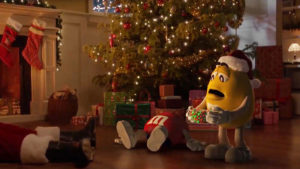 The long-running spot has been a staple of the Christmas season for over 20 years, but it ends on a cliff hanger, begging fans to ask… so what exactly happened?

That’s the premise of the new, reimagined 90-second continuation of the memorable commercial appropriately called ‘Faint 2: A Very Yellow Sequel’.

The new spot, created and produced by CLM BBDO in France with support from BBDO New York, follows the clumsy, but well-meaning Yellow as he attempts to fly Santa’s sleigh, deliver the presents and save Christmas. In true Yellow fashion, things go catastrophically wrong, but the mix up has unintended consequences that highlight the true meaning of Christmas.

“This Christmas season, we’re excited to check off a gift that’s been on our fans’ ‘wish list’ for more than 20 years: an ending to the iconic ‘Faint’ commercial,” said Michael Magee, VP Growth Acceleration, Mars, Inc. “We want to bring everyone together with M&M’s once again this holiday season by highlighting the true meaning of Christmas for a new generation of fans.”

A 60-second cut of the new film will debut in the US on NBC during the annual Christmas Tree lighting at Rockefeller Centre. A truly global campaign, ‘Faint 2’ will also run in 11 additional markets around the world throughout the holiday season.

“Faint 2 is somewhat of a Christmas gift to Yellow, and the Christmas adventure we would expect from an entertaining brand such as M&M’s,” said Matthieu Elkaim, BBDO Chief Creative Officer at CLM BBDO. “It’s an action movie packed with drama, comedy, and emotion all at the same time.”

Iconic M&M’s Holiday Ad Finally Gets a Sequel, 21 Years Later added by Newsroom on November 29, 2017
View all posts by Newsroom →