By Newsroom on November 4, 2015Comments Off on Jack Daniel’s Launches Tennessee Fire with OOH Campaign 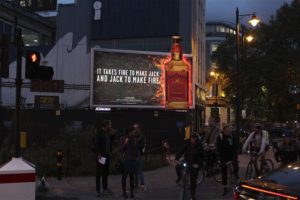 Jack Daniel’s, the Tennessee whiskey brand owned by Brown-Forman, has launched an out of home (OOH) campaign in the UK to launch its new drink, Tennessee Fire.

The campaign sees a 2D installation of the bottle protruding out of billboards across Old Street and Mile End in London, and at London Road in Manchester.

The work has been created by Arnold Worldwide. It shows the product among black coals, with the ones around the bottle burning. The text on the board reads: “It takes fire to make Jack. And Jack to make fire.”

The image of the bottle will also be projected onto buildings on Bonfire Night, 5 November, across “key drinking hubs” in London, Manchester and Glasgow.

Rosie Straker, the account director at Kinetic, said: “A brand such as Jack Daniel’s has amazing heritage with its use of OOH on the London underground, and we are incredibly excited to help launch Jack Daniel’s Tennessee Fire in such a non-traditional way. It represents a great example of Jack Daniel’s utilising the engaging possibilities in the world of OOH.”