By Newsroom on February 19, 2013Comments Off on Jägermeister Launches Second Phase Of Campaign 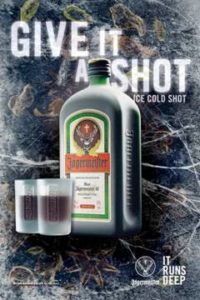 Jägermeister is building on the success of its first ever ATL campaign in the UK with a second burst of activity in February and March of this year.

The ‘It Runs Deep’ campaign, originally launched in November 2012, will roll out nationally and including outdoor, print, digital and social media advertising.

The campaign is built upon Jägermeister’s new brand ethos – ‘It Runs Deep’ – celebrating the bonds experienced between true friends and brought together through Jägermeister.

The ethos also links directly back to the product – the brand’s heritage, the alchemy of its secret ingredients, the ice cold serve and multi-layered and taste. The campaign is being driven by outdoor media, commencing on 25th February.

Featuring 48 and 6 sheets of the two creatives, ‘Deep Freeze’ and ‘Give it a Shot,’ the campaign will appear throughout the London Underground network, as well as roadside in key UK cities including London, Manchester, Bristol, Leeds, Sheffield, Newcastle, Edinburgh and Glasgow.

New for the second phase, Jägermeister will also be running mega 6 sheets and a banner in Central Manchester.

The digital activation is running in parallel from 25th February to 31st March and will be supported by a consumer competition on the recently revamped Jägermusic UK Facebook page. 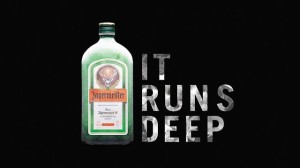 The digital activity will include banners, skins and flash executions across similar on-line and social sites, ultimately driving consumers back to the Jägermeister Facebook page.

“It was important to create a big impact in the first phase in order to introduce the new ‘It Runs Deep’ creative. It represents Jägermeister’s role as a drink that brings true friends together, it is no cheap shot for shallow friends but a toast to bonds that are deep, meaningful and true. Friends come together during the ‘shot moment’ of Jägermeister, strengthening the bonds that already run deep amongst them and leaving them with a shared experience that lives long in the memory.”

Since Jägermeister was introduced into the UK in 2005 it has grown year on year to become the UK’s no. 1 specialty spirit with a value of £139million CGA Period 9 – 2012.

Jägermeister is a herbal liqueur that was developed by Curt Mast from a secret recipe in 1934 and first launched in Germany a year later. It is distributed in the UK by Cellar Trends.

Jägermeister Launches Second Phase Of Campaign added by Newsroom on February 19, 2013
View all posts by Newsroom →