By Newsroom on May 19, 2014Comments Off on Japanese Company Plans ‘First Ad on the Moon’ with Pocari Sweat Drink Can

Japanese company Otsuka Pharmaceutical plans to place a capsule in the shape of one of its soft drinks cans on the surface of the moon next year.

Otsuka claims it will transport a capsule that looks like a can of its Pocari Sweat drink, 200,000 miles to the surface of the moon.

The mission will use a Falcon 9 rocket, which will set off in October 2015.

The “lunar dream capsule project” will place the titanium capsule on the moon using a Falcon 9 rocket, which is being developed by the private space company SpaceX. Otsuka is working with American company Astrobotic Technology on the project.

The capsule will contain some Pocari Sweat drink in powder form, as well as disks inscribed with the “dreams” of children in Asia who have submitted messages.

A video released by Otsuka Pharmaceutical claims the capsule is being designed to last for at least 30 years on the moon. 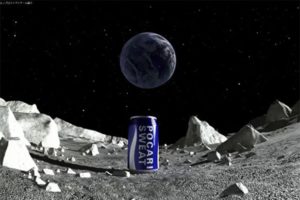 An Otsuka member of staff told Campaign Live: “There’s been a discovery of water molecules on the moon, so it would make sense to deliver the Pocari Blue, the brand colour originally inspired by the colour of water. You probably have never seen any blue used in the bodies of rockets or satellites. Bringing the colour pigments into space is quite challenging.”

If successful, Otsuka could achieve the first privately launched landing on the moon.

The company, which makes medicines as well as drinks, performed a similar stunt in 2001 with the Pocari Sweat brand, when it created the first high-definition commercial in space featuring two cosmonauts drinking Pocari Sweat.

Japanese Company Plans ‘First Ad on the Moon’ with Pocari Sweat Drink Can added by Newsroom on May 19, 2014
View all posts by Newsroom →