By Newsroom on July 31, 2015Comments Off on John Smith’s Launches Limited Edition Batch Of Ale Into Space

To create a pint that is truly “out of this world” beer brand John Smith’s has launched a limited edition run of ale into space.

The Heineken owned drink, which is available to win, will give most Brits closest taste of space travel they are likely to get, with the cans travelling 37,430 meters above the earth’s surface and back again.

The crate, containing 10 cans of John Smith’s Extra Smooth, underwent testing by scientists to ensure it could cope with the conditions of space travel. 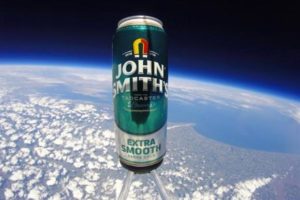 Experiments included vacuum chamber testing, extreme temperature exposure and impact testing before it was launched on a three hour journey to the edge of the earth’s atmosphere and back.

Once the ‘space ale’ landed back on the earth it was packaged into a limited edition box, which is being made available to fans via the brand’s Facebook page.

John Smith’s has also spotted and registered a pint glass shaped constellation, made from 100 stars.

John Smith’s Launches Limited Edition Batch Of Ale Into Space added by Newsroom on July 31, 2015
View all posts by Newsroom →