By Newsroom on October 12, 2012Comments Off on Justin King calls upon the food industry to adopt universal food labelling

Speaking at the industry’s Annual IGD Convention, he announced Sainsbury’s will be making a decisive move designed to encourage both food retailers and manufacturers to put aside their differences on food labelling, with the aim of making it easier for customers to make informed choices about the food they buy.

Justin King said: “Sainsbury’s has always championed simple, clear nutritional labelling. Seven years ago, we were the first to use traffic lights which are based on Guideline Daily Amounts on front of pack. Over 9,000 Sainsbury’s lines now carry our unique and much loved ‘Wheel of Health’ multiple traffic light labelling. Years of research show customers prefer a combination of red, amber, green traffic light colour-coding, combined with GDAs.

“Now we are calling for the industry to put aside their differences and work together and align behind a common format.

“Impending EU regulatory packaging changes mean all food retailers and manufacturers will need to change a number of aspects of their labelling anyway. The Department of Health is currently working on exactly what this means for theUKfood industry, but we know it will lead to a period of significant packaging change. It’s a once in a generation opportunity to give customers a unified approach that makes it easier for them to make healthier eating choices.

“So today Sainsbury’s is committing to introduce a new tabular format of colour-coded nutritional labelling as part of that change. We’re calling on other manufacturers and retailers to do the same so we can ensure a consistent, combined approach.

“We’re also calling for an end to the use of any other colours which confuse consumers. There can be no justification in customer terms for continued use of any colours except multiple traffic lights.” 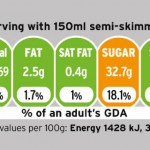 Justin King calls upon the food industry to adopt universal food labelling added by Newsroom on October 12, 2012
View all posts by Newsroom →