By Newsroom on January 16, 2018Comments Off on JWT London and Holiday Inn Express Turn Blue Monday into Bacon Monday

At 6am on Monday the 15th of January, a teaser film was released on Holiday Inn Express’s Facebook page telling London’s commuters where the Baconmobile would be. The first location was just outside Box Park in Shoreditch at 7am. It then made its way to Russell Square for around 11am, stopping all along the route to hand out its mouth-watering bacon rolls, and a vegetarian option available for those non-meat eaters. 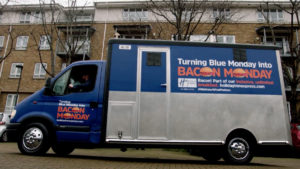 Lucas Peon, Executive Creative Director at J. Walter Thompson London, said: “We knew that having bacon on the breakfast menu had made Holiday Inn Express’ guests really happy. So on the bluest day of the year we thought what better way to provide a little pick me up to London’s commuters first thing on a rainy, grey morning than a free bacon bap and a little comedy. After all, Holiday Inn Express is the brand that knows what matters. And starting your day right matters.”

Mike Greenup, Vice President, Brand Management for Holiday Inn Express, IHG said: “We know what matters when it comes to our guests and the importance of setting them up to make the most of their day, that includes enjoying a good breakfast. From our research, it’s clear to see that bacon is a favourite breakfast choice — there is nothing better than waking up to the smell of bacon cooking away!”